US ‘100 percent behind Japan’ after North Korean ballistic missile launch 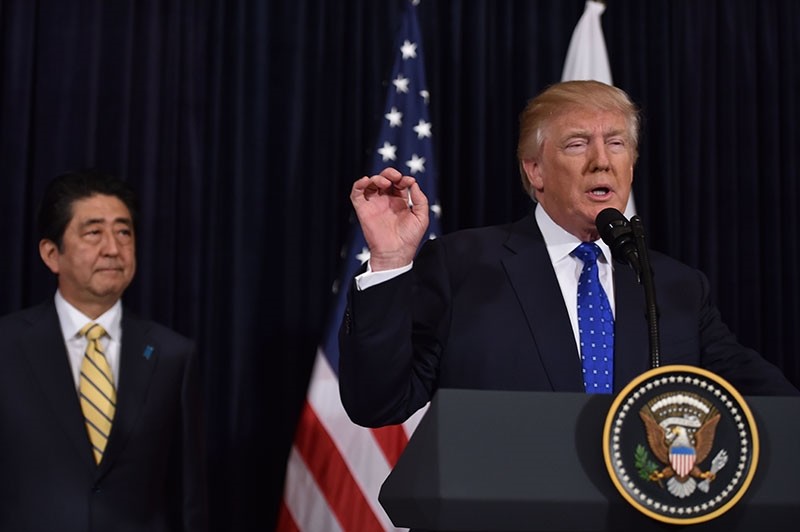 North Korea reportedly fired a ballistic missile early Sunday in what would be its first such test of the year and an implicit challenge to President Donald Trump, who stood with the Japanese leader as Shinzo Abe called the move "absolutely intolerable."

There was no immediate confirmation from the North, which had recently warned it is ready to test its first intercontinental ballistic missile. The U.S. Strategic Command said it detected and tracked what it assessed to be a medium- or intermediate-range ballistic missile.

North Korean media are often slow to announce such launches, if they announce them at all. As of Sunday afternoon, there had been no official announcement and most North Koreans went about their day with no inkling that the launch was major international news.

The reports came as Trump was hosting Abe and just days before the North is to mark the birthday of leader Kim Jong Un's late father, Kim Jong Il.

Appearing with Trump at a news conference at the president's south Florida estate, Abe condemned the missile launch as "absolutely intolerable." Trump followed Abe with even fewer words, saying in part: "I just want everybody to understand and fully know that the United States of America stands behind Japan, its great ally, 100 percent."

Abe read a brief statement in which he called on the North to comply fully with relevant U.N. Security Council resolutions. He said Trump has assured him of U.S. support and that Trump's presence showed the president's determination and commitment.

South Korea's Joint Chiefs of Staff said in a statement the missile was fired from around Banghyon, North Pyongan Province, which is where South Korean officials have said the North test launched its powerful midrange Musudan missile on Oct. 15 and 20.

The military in Seoul said that the missile flew about 500 kilometers (310 miles). But Yonhap reported that while determinations are still being made, it was not believed to be an ICBM.

The missile splashed down into the sea between the Korean Peninsula and Japan, according to the U.S. Strategic Command. Japan's Chief Cabinet Secretary Yoshihide Suga told reporters the missile did not hit Japanese territorial seas. The North conducted two nuclear tests and a slew of rocket launches last year in continued efforts to expand its nuclear weapons and missile programs. Kim Jong Un said in his New Year's address that the country has reached the final stages of readiness to test an ICBM, which would be a major step forward in its efforts to build a credible nuclear threat to the United States.

Though Pyongyang has been relatively quiet about the transfer of power to the Trump administration, its state media has repeatedly called for Washington to abandon its "hostile policy" and vowed to continue its nuclear and missile development programs until the U.S. changes its diplomatic approach.

Just days ago, it also reaffirmed its plan to conduct more space launches, which it staunchly defends but which have been criticized because they involve dual use technology that can be transferred to improve missiles.

Kim Dong-yeop, an analyst at the Institute for Far Eastern Studies in Seoul, speculated the missile could be a Musudan or a similar rocket designed to test engines for an intercontinental ballistic missile that could hit the U.S. mainland. Analysts are divided, however, over how close the North is to having a reliable long-range rocket that could be coupled with a nuclear warhead capable to striking U.S. targets.

South Korea's Acting President and Prime Minister Hwang Kyo-ahn said that his country will punish North Korea for the missile launch. According to the Foreign Ministry, South Korea will continue to work with allies including the United States, Japan and the European Union to ensure a thorough implementation of sanctions against the North and make the country realize that it will "never be able to survive" without discarding all of its nuclear and missile programs.

The missile launch comes after President Trump called the alliance between the U.S. and Japan the "cornerstone of peace and stability in the Pacific region."

During the 2016 U.S. presidential race, Trump strongly criticized U.S. relations with its allies, saying that they are "not paying their fair share" and extended the same criticism to its NATO allies. He also supported the notion of Japan getting its own nuclear arsenal after another North Korean atomic weapon test (between 20 to 30 kilotons) last September.

"They do not pay us what they should be paying us because we are providing tremendous service and we're losing a fortune," Trump said. "We can't defend Japan… they may have to defend themselves or they may have to help us out."

Trump had also denounced the considerable trade deficit between Japan and the U.S. and consistently said that the U.S. needs to make better trade deals; not just with Japan but with China, Mexico and every other nation.

However, during Abe's visit, relations between the two nations have warmed again as the two men engaged in "golf diplomacy" in Mar-a-Lago and seemed to have developed a liking to each other.

"My scores in golf are not up to the level of Donald at all," Abe said on a more light-hearted note during their first joint press conference on Feb. 10.

"Both of which I consider a very, very high priority," Trump stated.

Although during the race it seemed that Trump was not going to be friendly towards Japan, Prime Minister Abe has been quick to praise Trump's "uphill struggle and fight" to get to the Oval Office, "and this is the dynamism of democracy." He has also vowed that his country would play a "greater role," militarily speaking, for defense and security in the region.

Trump withdrew the U.S. from the Trans-Pacific Partnership agreement last month, calling it a "great thing for the American worker."

Abe has avoided talking specifically over the American president's decision, but he did agree that "There will be even more new jobs born in the U.S.," and promised that Japan would support Trump's economic growth strategy.

"Of course, there are disagreements," Abe said. "But we should not close down dialogue just by pointing to the differences and ignoring the common interests and common goals."