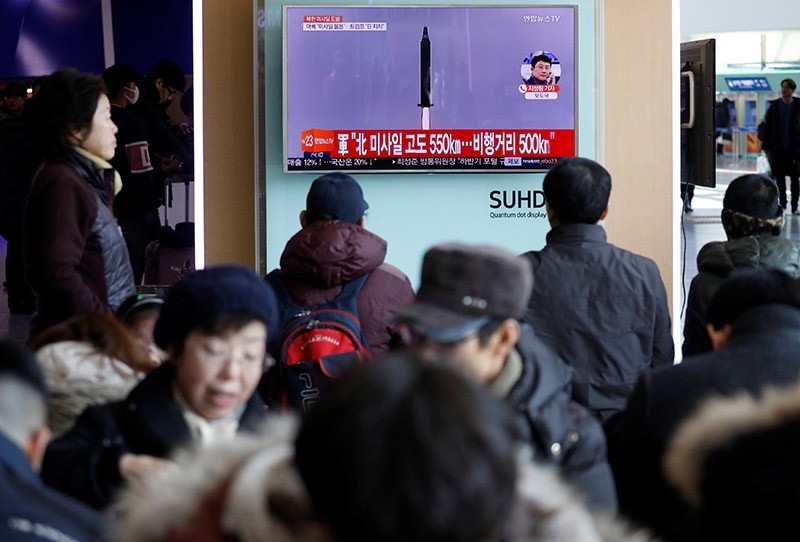 Passengers watch a TV screen broadcasting a news report on North Korea firing a ballistic missile into the sea off its east coast, at a railway station in Seoul, South Korea, February 12, 2017. (Reuters Photo)
by Associated Press Feb 13, 2017 12:00 am

The United States, Japan and South Korea have requested urgent diplomatic talks at the United Nations on Monday over North Korea's latest ballistic missile launch, with Seoul condemning what it called "serious military and security threats" and predicting more such tests.

A spokesman for the U.S. Mission to the United Nations said Sunday night that the meeting is expected to take place Monday. The spokesman spoke on condition of anonymity because he was not authorized to speak publicly.

The banned missile test is seen as an implicit challenge to U.S. President Donald Trump, who has vowed a tough line on Pyongyang but has yet to release a strategy for dealing with a country whose nuclear ambitions have bedeviled U.S. leaders for decades.

North Korean state media said leader Kim Jong Un was at the site to observe the launch and expressed pleasure at the North's expansion of its strategic strike capabilities.

"These are serious military and security threats," Jeong Joon-hee, spokesman at the Ministry of Unification, told reporters. "Pyongyang has no intention of backing away from its goal to become a country with nuclear weapons."

A report on the launch carried early Monday by the North's Korean Central News Agency said Kim watched from an observation post and gave the order to fire the "Pukguksong-2," which it said was a "Korean style new type strategic weapon system."

It is believed to have flown about 500 kilometers (310 miles) before splashing down into the ocean in international waters.

The report said the test proved "the reliability and security" of a new mobile launching system, the solid fuel that was used and the guidance and control features of the ballistic missile. Solid fuel can give missiles longer range and make detecting them before launch more difficult because they can be readied faster than liquid fuel missiles.

The report also said the test verified control and guidance capabilities and said the missile can be "tipped with a nuclear warhead."

It suggested the launch conducted in a "lofted" style, which puts the missile into a high trajectory rather than a lower one that gives it more range, in order take "the security of the neighboring countries into consideration."

It added Kim "expressed great satisfaction over the possession of another powerful nuclear attack means."

"Now our rocket industry has radically turned into high thrust solid fuel-powered engine from liquid fuel rocket engine and rapidly developed into a development- and creation-oriented industry, not just copying samples," he said. "Thanks to the development of the new strategic weapon system, our People's Army is capable of performing its strategic duties most accurately and rapidly in any space: under waters or on the land."

North Korea had warned it was ready to test its first intercontinental ballistic missile. The U.S. Strategic Command, however, said it detected and tracked what it assessed to be a medium- or intermediate-range missile. The reports of the launch came as Trump was hosting Abe and just days before the North is to mark the birthday of leader Kim Jong Un's late father, Kim Jong Il.

After receiving word of the launch, Trump stood at his south Florida estate with Japanese Prime Minister Shinzo Abe, who called the move "intolerable."

Appearing with Trump at a news conference at Trump's estate, Abe condemned the missile launch as "absolutely intolerable." He read a brief statement calling on the North to comply fully with relevant U.N. Security Council resolutions. He said Trump had assured him of U.S. support and that Trump's presence showed the president's determination and commitment.

Trump followed Abe with even fewer words, saying in part: "I just want everybody to understand and fully know that the United States of America stands behind Japan, its great ally, 100 percent."

Stephen Miller, Trump's chief policy adviser, said Trump and Abe had displayed "an important show of solidarity" between their nations.

"The message we're sending to the world right now is a message of strength and solidarity; we stand with Japan and we stand with our allies in the region to address the North Korean menace," Miller said during an interview Sunday with ABC's "This Week."

The firing of the missile is a major challenge for the Trump administration, said George Lopez, an expert in economic sanctions and nuclear disarmament and a professor emeritus of peace studies at the University of Notre Dame.

"The Sunday test of an intermediate-range ballistic missile by the North Korean regime is in clear violation of past United Nations Security Council resolutions and recent warning from the U.S.," Lopez said. "As such, it is a significant challenge to the Trump Administration because it has yet to develop its policies toward the region, toward North Korea, or its role in the UN and its use of economic sanctions. So we may learn a lot about Mr. Trump's crisis diplomacy in the coming days."

South Korea's Joint Chiefs of Staff said in a statement that the missile was fired from around Banghyon, North Pyongan Province, which is where South Korean officials have said the North test-launched its powerful midrange Musudan missile on Oct. 15 and 20.

The missile splashed down into the sea between the Korean Peninsula and Japan, according to the U.S. Strategic Command. Japanese Chief Cabinet Secretary Yoshihide Suga told reporters it did not hit Japanese territorial seas.

The North conducted two nuclear tests and a slew of rocket launches last year in continued efforts to expand its nuclear weapons and missile programs. Kim Jong Un said in his New Year's address that the country had reached the final stages of readiness to test an ICBM, which would be a major step forward in its efforts to build a credible nuclear threat to the United States.

Though Pyongyang has been relatively quiet about the transfer of power to the Trump administration, its state media has repeatedly called for Washington to abandon its "hostile policy" and vowed to continue its nuclear and missile development programs until the U.S. changes its diplomatic approach.

Just days ago, it also reaffirmed its plan to conduct more space launches, which it staunchly defends but which have been criticized because they involve dual-use technology that can be transferred to improve missiles.

"Our country has clearly expressed its standpoint, that we will continue to build up our capacity for self-defense, with nuclear forces and a pre-emptive strike capability as the main points, as long as our enemies continue sanctions to suppress us," Pyongyang student Kim Guk Bom said Sunday. "We will defend the peace and security of our country at any cost, with our own effort, and we will contribute to global peace and stability."

South Korean Prime Minister Hwang Kyo-ahn, who is also the acting president, said his country would punish North Korea for the missile launch. The Foreign Ministry said South Korea would continue to work with allies, including the United States, Japan and the European Union, to ensure a thorough implementation of sanctions against the North and make the country realize that it will "never be able to survive" without discarding all of its nuclear and missile programs.