Malaysian ship with aid for Rohingya arrives in Bangladesh 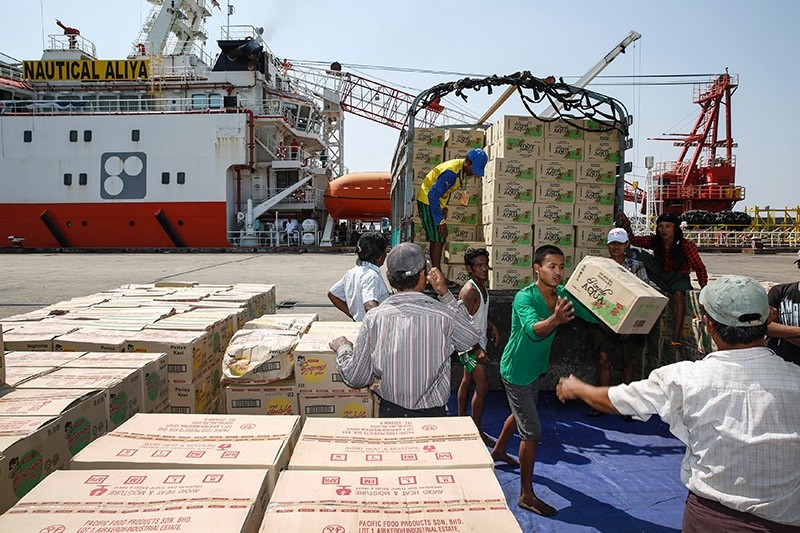 A Malaysian ship carrying aid for thousands of Rohingya Muslims who have fled a bloody army crackdown in Myanmar docked in Bangladesh's Chittagong port Tuesday days after it met nationalist protesters in Yangon.

Senior Bangladeshi officials and Malaysian diplomats gathered at the port as Nautical Aliya docked in the southern city, from where its aid cargo will be transported to Rohingya camps.

"It has berthed at the Chittagong port. The ship will start unloading after a brief ceremony in the next few minutes," Chittagong Port Authority Secretary Omar Faruque told AFP.

Trucks will carry the 1,472 tons of food, clothing and medical items to Cox's Bazar, some 200 kilometers (125 miles) south of Chittagong for distribution to tens of thousands of Rohingya refugees.

The ship initially planned to dock at Teknaf in southern Bangladesh, where almost 70,000 Rohingya have fled from Myanmar's Rakhine state since October to escape the violence.

It also tried to dock near the island of Kutubdia on Monday, but "technical issues" forced it to travel further north to Chittagong, chief administrator of the region Ruhul Amin told AFP.

Myanmar denies citizenship to the million-strong Rohingya, despite many of them living on its soil for generations.

Buddhist nationalist groups are especially strong in their vitriol, rejecting them as illegal immigrants from Bangladesh.

Hundreds of Rohingya are thought to have been killed in the brutal campaign, which the United Nations says may amount to ethnic cleansing.

Tens of thousands have fled to neighboring Bangladesh, bringing harrowing tales of murder and rape.

Myanmar's treatment of the Rohingya has sparked international criticism, including from Muslim-majority Malaysia -- a rare spat between Southeast Asian neighbors.

Myanmar initially refused to allow the ship into its waters and has barred it from sailing to Rakhine's state capital Sittwe.

The delivery comes days after a blistering report from the UN accused Myanmar's security forces of carrying out a campaign of rape, torture and mass killings against the Rohingya.

Based on interviews with hundreds of escapees in Bangladesh, investigators said the military's "calculated policy of terror" very likely amounted to ethnic cleansing.