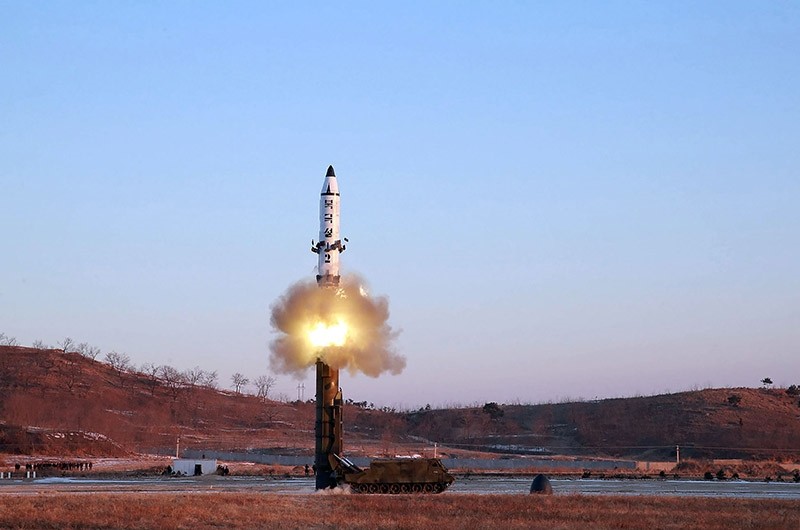 A council statement agreed to by all 15 members followed strong condemnation by Secretary-General Antonio Guterres of the latest launch and U.S. President Donald Trump's pledge to deal with North Korea "very strongly."

The latest missile test is seen as an implicit challenge to Trump, who has vowed a tough line on North Korea but has yet to release a strategy for dealing with a country whose nuclear ambitions have bedeviled U.S. leaders for decades.

"North Korea is a big, big problem and we will deal with that very strongly," Trump said at a joint news conference Monday with Canadian Prime Minister Justin Trudeau.

Nikki Haley, his U.N. ambassador, said in a statement later: "We call on all members of the Security Council to use every available resource to make it clear to the North Korean regime — and its enablers — that these launches are unacceptable."

"It is time to hold North Korea accountable — not with our words, but with our actions," she said.

There was no indication of what "actions" the Trump administration has in mind, and Ukraine's U.N. ambassador, Volodymyr Yelchenko, the current council president, and Japanese Ambassador Koro Bessho wouldn't comment on possible "further significant measures."

Those same words were used in the last Security Council statement on the unsuccessful Oct. 17 missile test by North Korea. That was followed by the latest sanctions resolution Nov. 30 targeting North Korea's hard currency revenues by placing a cap on coal exports, cutting them by at least 62 percent or by an estimated $800 million.

The council statement issued Monday was almost exactly the same as the one adopted Oct. 17 — a practice that makes it much easier for members to reach quick agreement.

"The secretary-general appeals to the international community to continue to address this situation in a united manner," Haq said.

Japan's Bessho told reporters the key is implementing sanctions to get North Korea to change course.

"I think we need to keep pushing because we're not looking for a military solution," he said. "We have to have a peaceful solution, and the Security Council ... is the body that is most suited for that role."

Monday's council statement stressed "the importance of maintaining peace and stability on the Korean peninsula and in northeast Asia at large" and expressed members' "commitment to a peaceful, diplomatic and political solution to the situation."

South Korea earlier condemned what it called "serious military and security threats" and predicted more such tests. Prime Minister Hwang Kyo-ahn, who is also the acting president, said his country would punish North Korea for the missile launch.

In previous Security Council actions on North Korea, the United States and China, a neighbor and ally of Pyongyang, have been the key negotiators.

North Korea already has a variety of land-based missiles that can hit South Korea and Japan, including U.S. military bases in those countries. It has also successfully tested a submarine-launched missile and development of such missiles would add a weapon that is harder to detect before launch.

North Korea's Central News Agency said the country's leader, Kim Jong Un, was at the launch site to observe Sunday's test and expressed pleasure at the North's expansion of its strategic strike capabilities. The report early Monday said Kim gave the order to fire the "Pukguksong-2," which the agency said was a "Korean style new type strategic weapon system."

It is believed to have flown about 500 kilometers (310 miles) before splashing down into the ocean in international waters.

The report said the test proved "the reliability and security" of a new mobile launching system, the solid fuel that was used, and the guidance and control features of the ballistic missile. Solid fuel can give missiles longer range and make detecting them before launch more difficult because they can be readied faster than liquid fuel missiles.