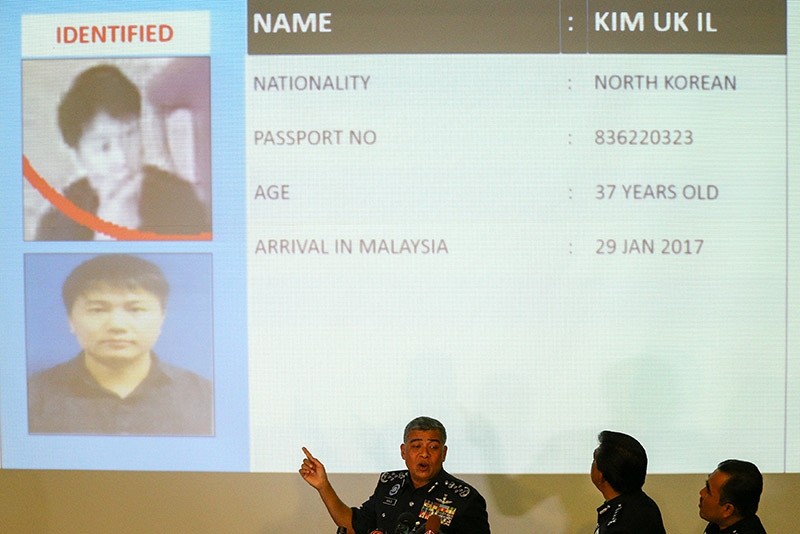 Inspector-General of Police Khalid Abu Bakar said at a news conference Wednesday he couldn't confirm whether North Korea's government was behind the Feb. 13 death of Kim Jong Nam, but added that "what's clear is that those involved are North Koreans."

He said four North Koreans suspected of involvement are believed to have fled the same day and are now back in North Korea, adding that Malaysian officials have asked Pyongyang to find the suspects and return them to Kuala Lumpur.

One North Korean suspect is in custody and Khalid said three are believed to be at large in Malaysia.

Jong-Nam died on February 13 after being attacked as he waited for a plane to Macau.

Leaked CCTV footage from the airport shows the chubby 45-year-old being approached by two women, one of whom grabs him from behind and appears to shove a cloth in his face.

Moments later Jong Nam is seen seeking help from airport staff, who direct him to a clinic, where he apparently slumped in a chair.

Malaysian police say he suffered a seizure and died before he reached hospital, seemingly from the effects of a toxin.

Seoul has said from the start that Pyongyang was behind the murder, citing a "standing order" from Jong-Un to kill his elder sibling, and a failed assassination bid in 2012.

Asked whether the five North Korean suspects had masterminded the attack, Khalid said he believed they were "heavily involved" in the murder.

Four of the men fled the country on the day of the killing and returned to Pyongyang, he said, while one remains in custody in Malaysia.

The police chief dismissed claims the two women had believed the attack was a made-for-TV prank.

"Of course they knew" it was a poison attack, Khalid said. "I think you have seen the video, right? The lady was moving away with her hands towards the bathroom. She was very aware that it was toxic and that she needed to wash her hands."

Khalid said Vietnamese suspect Doan Thi Huong, 28, and Indonesian Siti Aishah, 25, had been trained to swab the man's face, practicing in Kuala Lumpur before the assault at the airport.

Khalid said investigators had been "very fair" and the North Korean embassy now had a duty to assist them.

Pyongyang and Kuala Lumpur have been at daggers drawn over the attack, with North Korea's envoy insisting Jong-Nam's body be returned and objecting to an autopsy.

Malaysia rejected the request, saying the remains must stay in the morgue until a family member identifies them and submits a DNA sample.

No next-of-kin have come forward, Khalid said, adding rumors that Jong-Nam's son Kim Han-Sol was in Malaysia were not true.

First born Jong-Nam was once thought to be the natural successor to his father, the then-North Korean leader Kim Jong-Il.

But after Jong-Il's death in 2011 the succession went instead to Kim Jong-Un, a child of a later marriage.

Some analysts have said Jong-Nam was a marked man since he criticized the regime in 2011 to a Japanese journalist, while others said the killing could have been ordered over reports he was readying to defect.

Reports of purges and executions have emerged from the current regime as the young leader tries to strengthen his grip on power in the face of international pressure over his nuclear and missile programs.