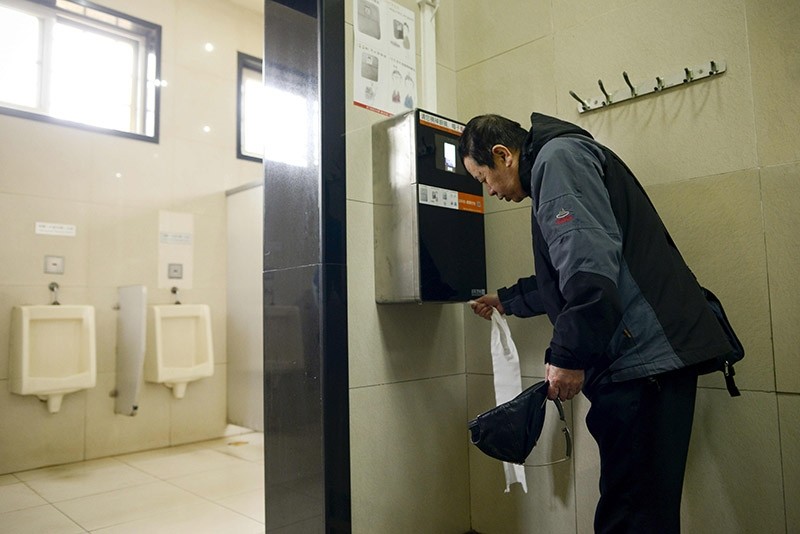 A man uses an automatic toilet paper dispenser that uses facial recognition technology at a public toilet at the Temple of Heaven in Beijing on March 21, 2017. (AFP Photo)
by Associated Press
Apr 03, 2017 12:00 am

Fed up with the theft of toilet paper from public bathrooms, tourist authorities in China's capital have begun using facial recognition technology to limit how much paper a person can take.

The unusual move — part of a "toilet revolution" — is another step in China's vast upgrading of public facilities.

Bathrooms at tourist sites, notorious for their primitive conditions and nasty odors, are a special focus of the campaign, a response to a vast expansion in domestic travel and demands for better-quality facilities from a more affluent public.

"Today in China, people are highly enthusiastic about tourism, and we have entered a new era of public tourism," said Zhan Dongmei, a researcher with the China Tourism Academy. "The expectation of the public for the toilet is becoming higher."

At Beijing's 600-year-old Temple of Heaven, administrators recognized the need to stock the public bathrooms with toilet paper, a requirement for obtaining a top rating from the National Tourism Authority. But they needed a means of preventing patrons from stripping them bare for personal use — hence the introduction of new technology that dispenses just one 60-centimeter (2-foot) section of paper every nine minutes following a face scan.

"People take away the paper mostly because they are worried they can't find any when they want to use it the next time. But if we can provide it in every toilet, most people will not do it anymore," Zhan said.

Launched two years ago, the revolution calls for at least 34,000 new public bathrooms to be constructed in Beijing and 23,000 renovated by the end of this year. Authorities are also encouraging the installation of Western-style sit-down commodes rather than the more common squat toilets. Around 25 billion yuan ($3.6 billion) has already been spent on the program, according to the National Tourism Administration.

The ultimate target, Zhan said, "is to have a sufficient amount of toilets which are clean and odorless and free to use."

At Happy Valley, the largest amusement park in Beijing, around 4 million annual visitors rely on 18 bathrooms, each of which is assigned one or two cleaners who must make their rounds every 10 minutes on busy days.

"People come here to have fun, but if the toilets are disgusting, how can they have a good time here?" said Vice General Manager Li Xiangyang. "It is the least we should do to offer a clean and tidy environment for tourists to enjoy both the tour of the park and the experience of using our toilets."

Going a step further, the financial hub of Shanghai even opened its first gender-neutral public toilet in November in order to boost convenience and efficiency.

"Women are stuck waiting in longer lines for stalls than men, and it is fair for men and women to wait in line together," Shanghai resident Zhu Jingyi said after using the facility.

Zhan said the toilet revolution is about 90 percent complete, but warned that it has yet to be won.

"We can't accept the situation that a lot of investments have been made to build toilets and they turn out to be unsanitary and poorly managed," he said.