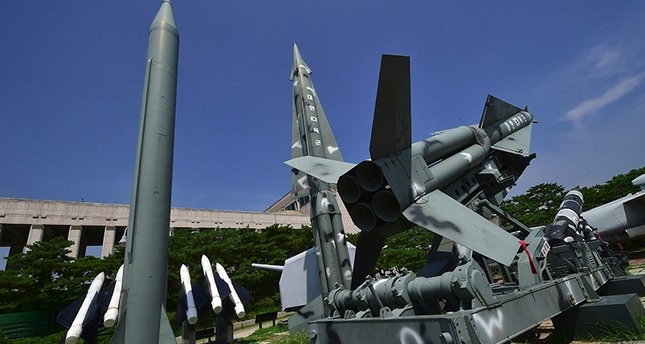 Replicas of a North Korean Scud-B missile (L) and South Korean Nike missiles are displayed at the Korean War Memorial in Seoul on July 19, 2016 (AFP Photo)
by Compiled from Wire Services Apr 05, 2017 12:00 am

After North Korea fired a missile into the Sea of Japan ahead of the Xi-Trump summit, U.S. State Secretary Tillerson sent a stern message in an unusually short statement while China called for easing tensions in the Korean Peninsula

North Korea test-fired a ballistic missile into the sea off its east coast just a day before the U.S.-China presidential summit. North Korea is increasingly becoming a focus of the U.S.-China meeting as the White House is talking in more urgent terms about Pyongyang's pursuit of nuclear weapons,

Speaking at a White House business forum Tuesday, Trump called North Korea a "humanity problem." A White House official later said "all options are on the table" for the U.S., though the official would not say what steps Trump was willing to take to curb Pyongyang's pursuit of a nuclear weapon. Trump and Xi will huddle for two days at Trump's Mar-a-Lago estate in Florida, a venue chosen to give the summit a more informal feel. White House officials said Tuesday that trade and security would be high on the new American president's agenda, including pushing China to exert more economic pressure on North Korea.

"It is a grave act of provocation to [Japan's] national security and something we cannot tolerate," Abe said, calling the launch "a clear violation of United Nations Security Council resolutions."

A statement from South Korea's foreign ministry denounced the launch as a "blatant" challenge to U.N. Security Council resolutions against North Korea.

The response from America's chief diplomat to North Korea's latest missile launch was an abrupt departure from the usual — which may be a turning point, analysts in Asia say.

The statement from U.S. Secretary of State Rex Tillerson totaled 23 words: "North Korea launched yet another intermediate range ballistic missile. The United States has spoken enough about North Korea. We have no further comment."

While Tillerson's statement was unusually short and vague, experts in South Korea and Japan saw it as a sign of consistency on how the United States under President Donald Trump will deal with North Korea as it speeds up its nuclear weapon and missile developments.

North Korea with its missile launches probably wants to create attention and use it as leverage for concessions, but Tillerson with his statement has sent a stern message that the United States won't be a party to it, South Korean experts said.

China has called for "comprehensive measures" to achieve the denuclearization of the Korean Peninsula and resolve all parties' concerns.

"Under the current situation, all parties have to show self-restraint and refrain from doing anything that would exacerbate the current tense situation," she added.

"China is willing to make efforts together with all the parties to realize the denuclearization of the Peninsula and achieve peace and order in the region in the long term."