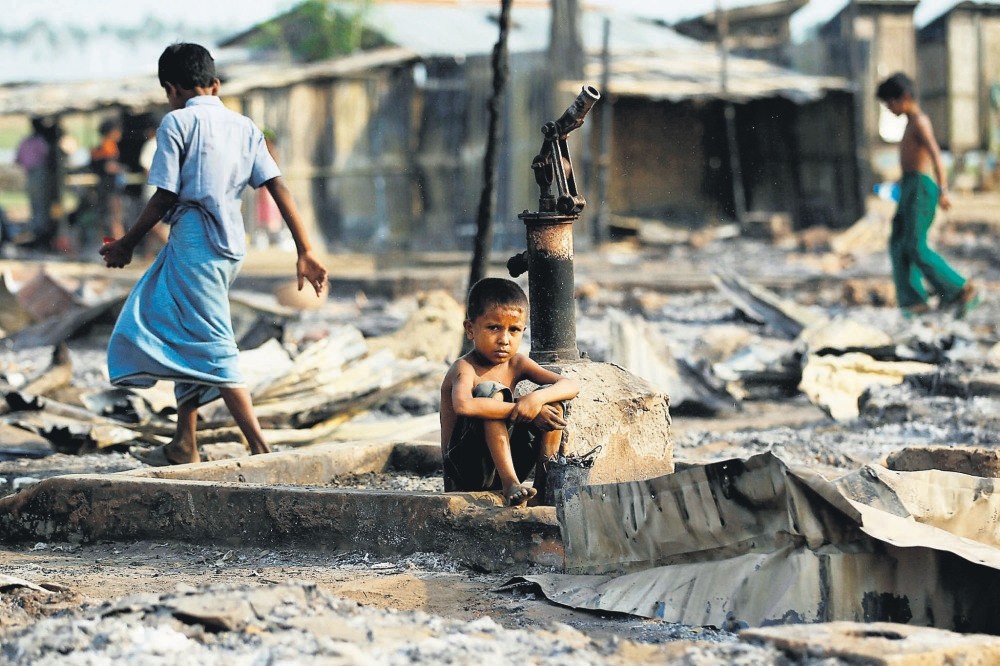 A boy looks on after a fire destroyed shelters at a camp for internally displaced Rohingya Muslims in the western Rakhine State near Sittwe, Myanmar.
by Compiled from Wire Services Apr 07, 2017 12:00 am

Despite the U.N. rights council's approval to investigate allegations of rape, murder and torture against the army, Myanmar leader Aung San Suu Kyi has denied security forces have carried out ethnic cleansing of Rohingya Muslims. Her statements came ahead of the by-elections which will be held on April 8 across the country.

"I don't think there is ethnic cleaning going on," Suu Kyi told the BBC in an interview when asked if she would be remembered as the Nobel Peace Prize winner who ignored ethnic cleansing in her own country.

"I think ethnic cleansing is too strong an expression to use for what is happening," said Suu Kyi who is facing international criticism for her government's handling of a crisis in the Muslim-majority Rakhine region.

Her National League for Democracy (NLD) faced the ballot box on Saturday in by-elections across the country, winning a string of seats but losing out in ethnic minority areas including Rakhine.

The NLD came to power in a historic 2015 election which ended half a century of brutal military rule, but there has been disillusionment with the administration as it struggles to push through reforms and ease unrest.

When asked by the BBC whether perceptions of her as an amalgam of Indian independence hero Mahatma Gandhi and Mother Teresa of Calcutta were incorrect as she was more similar to former British leader Margaret Thatcher, she said:

"Well no. I am just a politician. I am not quite like Margaret Thatcher, no. But on the other hand, I am no Mother Teresa either."

Attacks on Myanmar border guard posts in October last year by a previously unknown insurgent group ignited the biggest crisis of Suu Kyi's year in power, with more than 75,000 Rohingya fleeing to Bangladesh in the ensuing army crackdown.

A United Nations report issued earlier this year said Myanmar's security forces had committed mass killings and gang rapes against Rohingya during their campaign against the insurgents, which may amount to crimes against humanity.

The military has denied the accusations, saying it was engaged in a legitimate counterinsurgency operation. Myanmar has launched its own domestic probe into possible crimes in Rakhine and appointed former UN chief Kofi Annan to head a commission tasked with healing long-simmering divisions between Buddhists and Muslims. Rohingya who fled the crackdown told UN workers of horrendous abuses, including soldiers allegedly executing babies in front of their mothers, summary murders of Rohingya men and widespread gang rape of women.

Rohingyas are not recognized among the 134 official ethnicities in Myanmar because authorities see them as illegal immigrants from neighboring Bangladesh. They are subjected to forced labor, have no land rights and are heavily restricted by the government. They have no permission to leave the camps built for them, have no source of income and have to rely on the World Food Program to survive.
RELATED TOPICS