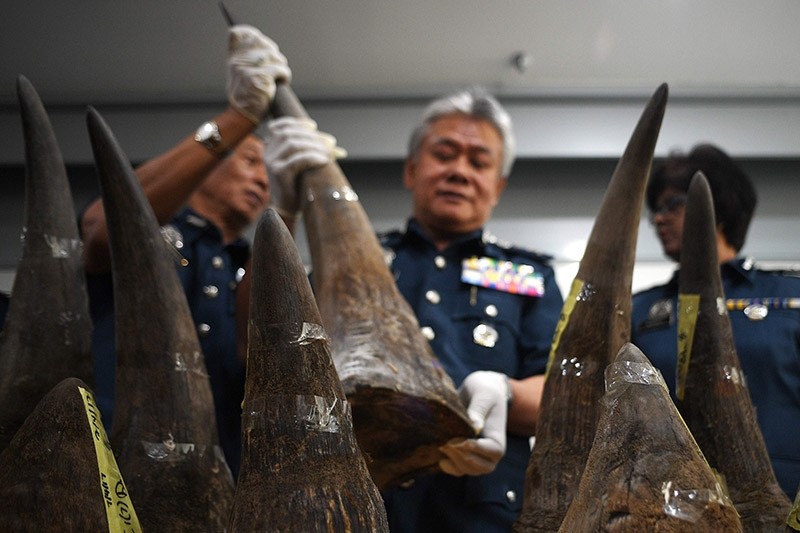 The haul is the latest indication that Malaysia has become an Asian transit hub for the illicit ivory and rhino horn trade.

The crate, listed as containing art objects, was imported from Mozambique on board a Qatar Airways flight which transited in Doha before arriving in Malaysia, Hamzah said in a statement.

Hamzah said the destination was listed as being in the town of Nilai in Malaysia's southern state of Negri Sembilan but it was a false address.

Rhino horn has been used in traditional Chinese medicine for thousands of years and is also carved into highly prized libation cups.

Under Malaysian law, it is an offence to import rhino horns without a licence.

In April last year Malaysia destroyed 9.5 tonnes of elephant ivory that it had seized over the years, in a move intended to deter smugglers who have long used the country as a trans-shipment point.

Malaysia has previously announced in parliament that 4,624 ivory tusks were confiscated between 2011 and 2014.

Ivory from African elephants is typically smuggled to Asia where it is carved into ornaments.

Hamzah also said 2.12 kg of ketamine worth 94.4 million ringgit was confiscated at the airport's budget terminal from a foreigner who arrived last Wednesday from Chennai in India.

"During an X-ray of the man's bag, we found white crystals which we believe was ketamine," he said.

Hamzah said the case was being investigated under the Dangerous Drugs Act 1952 which carries a mandatory death penalty upon conviction.