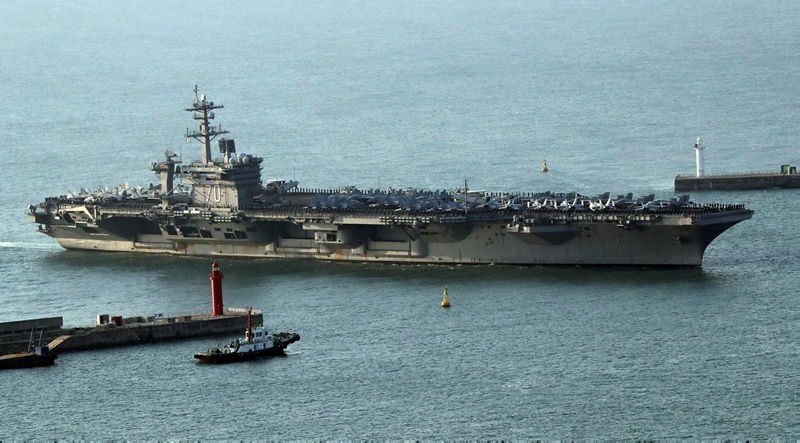 In response to recent military provocations by North Korea, Adm. Harry Harris, Commander of the United States Pacific Command, has directed the USS Carl Vinson to head toward the Korean Peninsula

The U.S. Navy Pacific Command has ordered an aircraft carrier strike group to set its course toward the Western Pacific Ocean, near the Korean Peninsula.

Operating in these waters is nothing new for the U.S. Navy, as it regularly partakes in exercises with South Korea, as a show of force. In fact, the Vinson was in South Korea just last month for similar military exercises. The latest situation, however, is slightly different.

On April 5, Pyongyang launched a NATO-designated "Scud" missile into the Sea of Japan. North Korean Scuds, identified as KN-15 by the U.S. Pacific Command, and called Pukguksong-2 by the North Koreans, hold the same design principles as their early Soviet counterparts, such as the R-11 Zemlya.

These ballistic missiles are intended to deliver payloads to their targets and have an estimated range of 700-1,200 kilometers, based on the previous tests conducted in February.

However, South Korean sources have claimed that the missile, which was probably an older variant, reached a maximum altitude of 189km and traveled only about 60km before splashing into the sea.

This is an unorthodox missile trajectory, as it went way too high but covered far too less. However, if that's what Pyongyang actually intended to do in the first place, remain unknown.

The launch was reminiscent of similar actions taken by the rogue Communist dictatorship back in February, when it launched another Pukguksong-2 into the Sea of Japan, the first launch of the medium-range ballistic missile.

The launch was conducted while the Japanese Prime Minister, Shinzō Abe, was visiting President Trump in Florida. Trump in his reaction said the U.S. "stands behind Japan, its great ally, 100 percent."

On March 6, North Korea also launched four ballistic missiles from its Tongchang-ri launch site in the country's northwest. The missiles flew nearly 1,000 kilometers before ending up in the Sea of Japan.

North Korea claims to have successfully tested nuclear warheads as well and says it is pursuing nuclear weapons in "defense against American aggression."

Meanwhile, China had called for de-escalation in the region and President Trump had also called for cooperation with the Chinese to resolve the North Korean issue, but days before his summit with Xi, in an interview with Financial Times, he said that the U.S. was able to solve the problem "with or without" China's help.

The Chinese President's visit to the U.S. was then overshadowed by the news of Trump's decision to strike a Syrian airbase, after the Assad regime allegedly used Sarin, a deadly nerve agent, in an attack on civilians in Idlib.

The Carrier Strike Group 1, centered around the flagship USS Carl Vinson, also includes two Ticonderoga-class cruisers, the USS Bunker Hill and the USS Lake Champlain and the ships of Destroyer Squadron 1, which was first formed during World War II.

While the U.S. forces do possess military capabilities of carrying critical strikes on North Korea, Pyongyang also has the capability to do significant damage in the region.