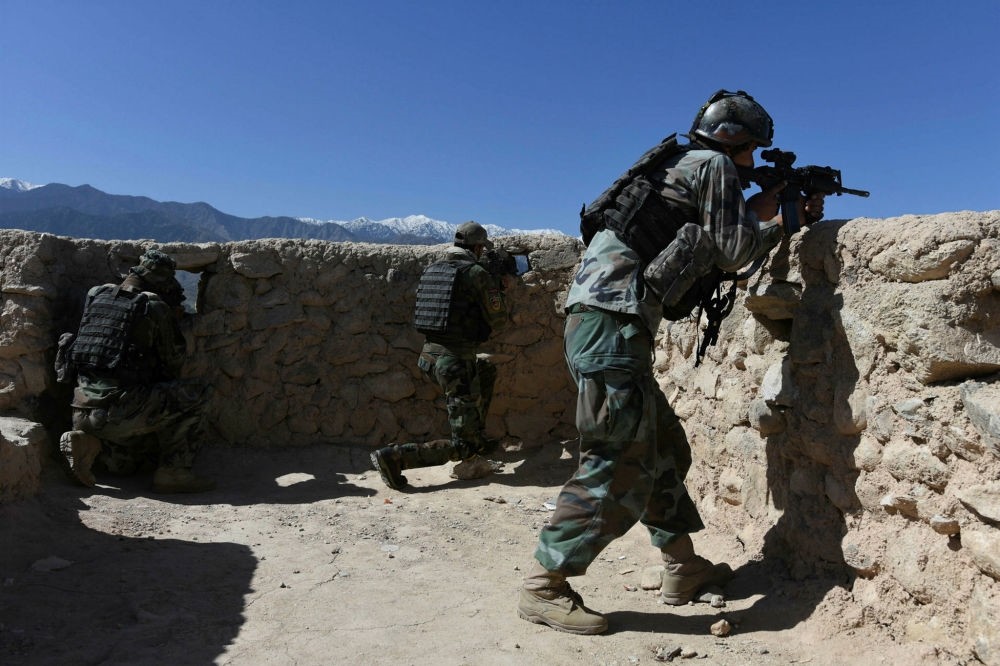 Afghan security officials take position during an operation near the site where USAF dropped a GBU-43 Massive Ordnance Air Blast on a Daesh militant cave complex in the Asad Khel area of Achin district, Nangarhar, Afghanistan, April 14. (AFP Photo)
by Compiled from Wire Services Apr 15, 2017 12:00 am

As the clashes between Washington and the Kremlin over the Assad regime continues, war-torn Afghanistan has become a renewed area of U.S.-Russian rivalry.

The U.S. dropped a GBU-43/B Massive Ordnance Air Blast (MOAB) bomb, otherwise known as the "Mother of All Bombs," on a Daesh stronghold in Afghanistan's eastern Nangarhar province. It is the first time the bomb, developed in the early days of the Iraq war, has been used in combat.

As many as 36 suspected Daesh militants were killed in Afghanistan when the United States dropped "the mother of all bombs," its largest non-nuclear device ever unleashed in combat, the Afghan Defense Ministry said on Friday.

The U.S. strike came a day before Russia hosted an international conference on Afghanistan on Friday. Representatives from Pakistan, Iran, India, China and several other former Soviet central Asian countries have confirmed their participation in the highly anticipated talks, which some observers say may pave the way to peace in Afghanistan despite the absence of the U.S.

"Relations will not br affected by the propaganda launched by some individuals through the free press and media because the diplomatic organ is the main and principal entity of the Afghan government," the ministry said in a statement released Tuesday. Russian President Vladimir Putin said Russia would help Afghanistan get on track toward peacefully resolving its internal problems and development.

The Kabul government has defended the dropping of the "Mother of All Bombs" by U.S. forces. "In this aerial bombing of Daesh centers, tunnels and hideouts in the Achin district, for which the Afghan government was taken into confidence, Daesh militants and enemies of Afghanistan have sustained heavy casualties," President Mohammad Ashraf Ghani said in a statement Friday.

Since February, government forces in Afghanistan have been waging an intensive operation against the militants in Nangarhar, where Achin is located. Just last week, a U.S. Special Forces member was killed in Nangarhar fighting Daesh.

The U.S. general commanding NATO forces in Afghanistan warned early February that he needs thousands more troops and accused Russia of seeking to prop up the Taliban. U.S. General John Nicholson stated in February that Russia is instead giving the Taliban encouragement and diplomatic cover in order to undermine American influence and to defeat NATO. The general told the senators that Russia was trying to "legitimize" the Taliban by promoting a "false narrative" that the rebels are fighting Daesh.

The NATO alliance has 13,300 troops in Afghanistan, about half of them American, assisting a much larger Afghan force in a war against the Taliban and other militants.

Afghan government police and armed forces now take the lead in the battle against the Taliban, which was forced from power in Kabul after the 2001 U.S.-led invasion. U.S. battlefield deaths are relatively rare since the transfer of primary responsibility to Afghan forces.

Last year was also particularly deadly for Afghan civilians. A U.N. report found that 11,500 were killed or injured in 2016, the most since it began keeping records in 2009.
RELATED TOPICS