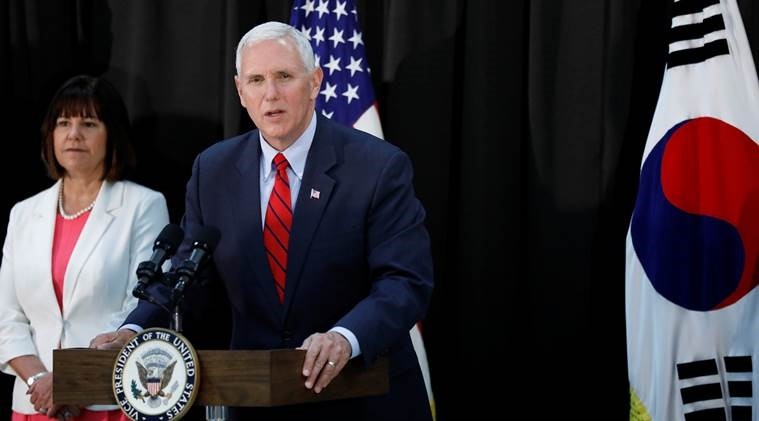 U.S. Vice President Mike Pence speaks during an Easter fellowship dinner at a military base in Seoul, South Korea, April 16.
by Angelos Berberakis Apr 17, 2017 12:00 am

Shortly after the North Korean military held a massive military parade, celebrating the 105th birthday of its founder, Kim II-sung, the country attempted to launch a missile that exploded shortly after being fired

April 15 marked the 105th birthday of Kim II-sung, North Korea's founding leader. As a combined response to the event and American Vice President Mike Pence's visit to South Korea, Pyongyang attempted to launch a ballistic missile that may have not been inter-continental.

Initial concerns were North Korea was embarking on yet another nuclear test, which probably would've escalated the situation even further.

The situation has already seen some significant development recently, with U.S. President Donald Trump dispatching the U.S. Navy's Strike Group 1, flag-shipped by the nuclear-powered USS Carl Vinson, to the Korean peninsula, probably as a message to Pyongyang to not try anything too unorthodox.

Meanwhile, President Trump has already met Chinese President Xi Jinping and have agreed to work together to solve the North Korean issue.

Trump has said that if the Chinese were not willing to cooperate then the U.S. would be both willing and able to solve the problem "with or without China." He also said that a big incentive for the Chinese to work together with the U.S. on Korea would be "trade."

It seems that, for now, China is starting to treat North Korea less like a younger brother and more like a developing rogue nuclear power; as a result they've turned back ships of North Korean coal, have also reportedly cut much-needed oil supplies and most flights in and out of the country to China.

In Seoul Vice President Pence on behalf of "Commander in Chief Donald Trump," said at an Easter Sunday lunch event with US troops, "We're proud of you, and we are grateful to your service to the United States of America on this frontier of freedom that is South Korea. […] This morning's provocation is just the latest reminder of the risk that each and every one of you face every day in the defense of the freedom of the people of South Korea and the defense of America in this part of the world."

Although this is not the first time the situation in the Korean peninsula has escalated, however, the worry today that was not present in the crises of the 1990s during the Bill Clinton administration is that the U.S., China, North and South Korea might be playing chess, but they're doing so with nuclear weapons.

The first missile launch during President Trump's administration came on Feb. 11 as the Japanese Prime Minister Shinzō Abe was in an official visit of the U.S. After the missiles ended up in the Sea of Japan, Abe said, "I just want everybody to know that the U.S. stands behind Japan, its great ally, 100 percent."

Since then, Pyongyang has test-launched even more missiles into the Sea of Japan, including one, a day prior to the Chinese premier's visit to the "Winter White House" in Florida, probably as another provocation and show of force, as well as disapproval, on behalf of North Korea.

The north has also claimed of capabilities of launching ballistic missiles from submarines, which translates into possible threats to the Western coasts of the U.S.

These claims, however, have not been substantiated by U.S. military officials and even so, with the presence of Strike Group 1 in the region and considering the U.S.'s technological and military dominance, it would be very difficult, if not impossible for North Korean submarines to go undetected.
Last Update: Apr 17, 2017 1:42 am
RELATED TOPICS