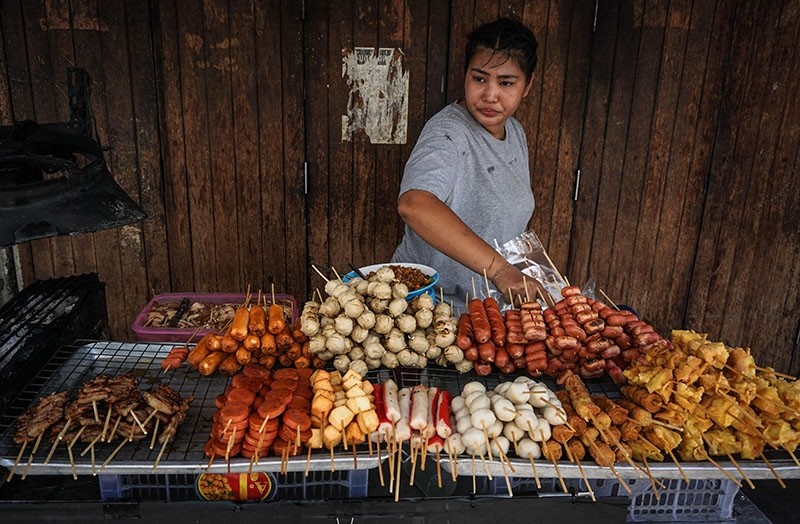 On a quiet stretch of Sukhumvit Soi 55, one of the Thai capital's most upscale commercial avenues, a street-food seller on Tuesday night huddled beside a case of skewered meatballs and sausages, glancing occasionally over his shoulders.

"I'm taking a risk being out here tonight and I'm very worried, but I need to make money," said the 42-year-old, who asked not to be named.

Bangkok, a city long defined by its street-food culture, is suddenly facing the unthinkable: a government that wants to ban street food. The ban already went into effect in three popular districts - Thong Lor, Ekkamai and Phra Khanong - on April 17.

The chief advisor to Bangkok's governor set off a local media firestorm on Tuesday after reportedly saying the ban would expand to include all street food in the Thai capital by the end of this year.

Chinatown and the world-famous backpacker district Khao San Road will be the government's next targets, according to Wanlop Suwandee, the advisor, who was quoted in The Nation newspaper.

"The street vendors have seized the pavement space for too long and we already provide them with space to sell food and other products legally in the market, so there will be no let-up in this operation," he said.

"Every street vendor will have to move out," he added.

And so, the anxious Thong Lor vendor spent part of Tuesday afternoon driving his hybrid motorbike-food stall through the smaller lanes searching for customers. By nightfall, he decided to take a chance and park for a while on the main avenue.

"It's like they're trying to take away my money and my happiness."

Thong Lor is one of the city's wealthiest districts, home to ritzy new high-rises, expensive restaurants and vibrant nightlife. But it is also where many working-class Thais are employed.

From security guards to masseuses, and retail workers to restaurant staff, among others, the people whose jobs bring them to the area rely on street food as a cheap, quick and - yes - delicious way to get them through their days.

"I'm very concerned. If there's no street food around here, my only option will be to eat something from 7-Eleven," said a 50-year-old masseuse named Gaew.

"That wouldn't be good for my health. But I don't have time to go anywhere else when I'm working," she added.

On Tuesday night, many of the street-food stalls that previously set up shop along the main avenue had pushed into the smaller lanes, where enforcement remained lax, leaving the 2.5-kilometre primary road with only a scattered handful of motorbike food carts.

Indeed, the Bangkok Metropolitan Administration's decision to target street food comes at an odd time, considering the city was named the world's top street-food destination for the second straight year in March, according to CNN.

"I pray they will lift the ban. I'm waiting for a new government, a new election. Maybe it will get better," the Thong Lor vendor said.

"If they banned street food here, the economy would collapse. It's not just vendors. It's the bigger picture. This area is a very important place for tourists," said Pongrat Satitmantana, 52, who was selling mango and sticky rice, one of Thailand's most popular sweets.

So far, the seller said, officials have only ordered food stalls to move closer to the sidewalk. They were previously allowed to park in the first lane of traffic, an area that has since been cordoned off into a pedestrian path.

The only other change, he noted, was that Burmese vendors had been banned from selling. In the past, Burmese sold pomegranate juice and other food products, but on Tuesday they were nowhere to be seen.

Pongrat was aware of the proposed ban, but he said he heard the decision to include Chinatown had already been called off. He was confident he would continue to be able to sell there in the future.

"Here is a tourist place," said a nearby rice porridge seller. "It has to be exempted from the ban. Here and Khao San Road."

"I have family to take care of," he added. "If you don't allow me to do business here, I need a new place where I can sell. It would be very difficult for people if they really banned all street food."