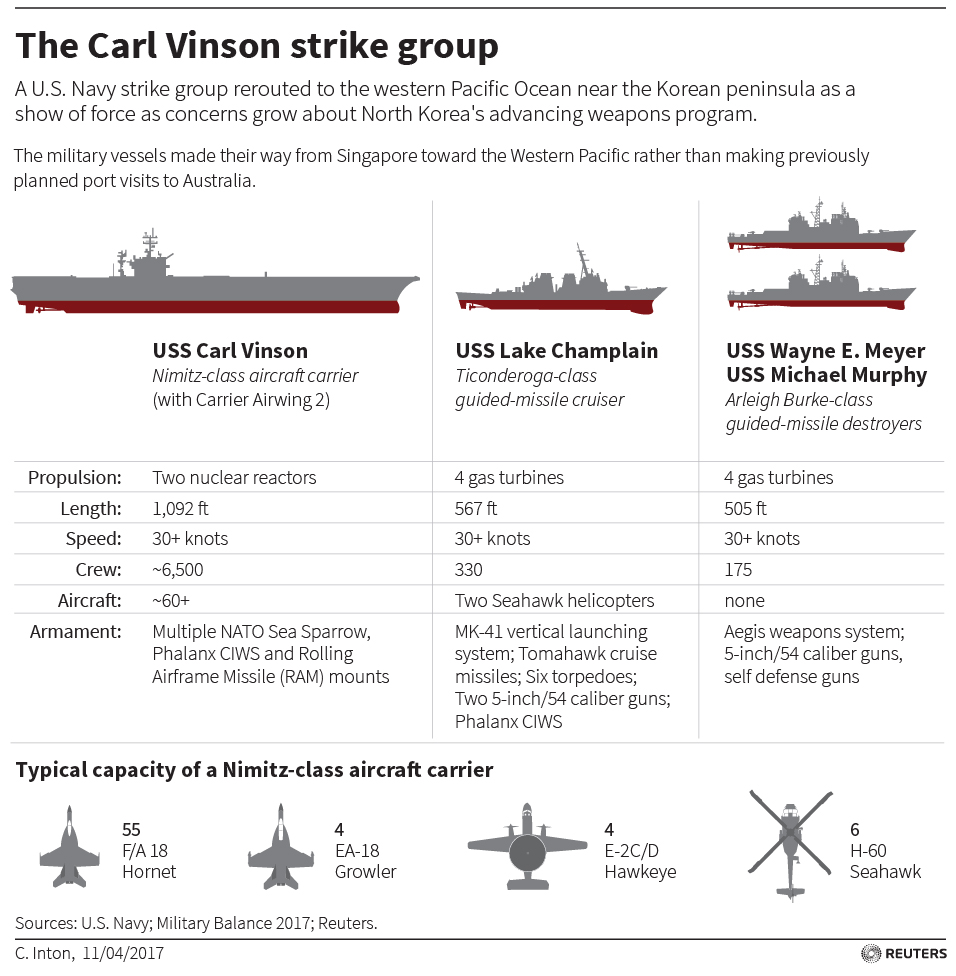 Trump's 'very powerful armada' he claimed to be sending to North Korea was actually heading to Australia https://t.co/pV5Ah4pR5D pic.twitter.com/xLL1uRub1U

When U.S. President Donald Trump boasted early last week that he had sent an "armada" as a warning to North Korea, the aircraft carrier strike group he spoke of was still far from the Korean peninsula, and headed in the opposite direction.

It was even farther away over the weekend, moving through the Sunda Strait and then into the Indian Ocean, as North Korea displayed what appeared to be new missiles at a parade and staged a failed missile test.

The U.S. military's Pacific Command explained on Tuesday that the strike group first had to complete a shorter-than-initially planned period of training with Australia. But it was now "proceeding to the Western Pacific as ordered," it said.

The perceived communications mix-up has raised eyebrows among Korea experts, who wonder whether it erodes the Trump administration's credibility at a time when U.S. rhetoric about the North's advancing nuclear and missile capabilities are raising concerns about a potential conflict.

"If you threaten them and your threat is not credible, it's only going to undermine whatever your policy toward them is. And that could be a logical conclusion from what's just happened," said North Korea expert Joel Wit at the 38 North monitoring group, run by Johns Hopkins University's School of Advanced International Studies.

The U.S. military initially said in a statement dated April 10 that Admiral Harry Harris, the commander of Pacific Command, directed the Carl Vinson strike group "to sail north and report on station in the Western Pacific."

Reuters and other news outlets reported on April 11 that the movement would take more than a week. The Navy, for security reasons, says it does not report future operational locations of its ships. 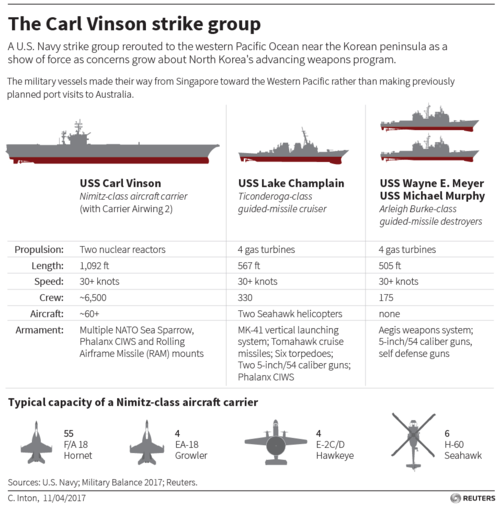 Defense Secretary Jim Mattis initially appeared to play down the deployment on April 11, saying the Vinson was "just on her way up there because that's where we thought it was most prudent to have her at this time."

"There's not a specific demand signal or specific reason why we're sending her up there," he said.

But even Mattis initially misspoke about the strike group's itinerary, telling a news conference that the Vinson had pulled out of an exercise with Australia.

The Pentagon has since corrected the record, saying the ship's planned port visit to Fremantle, Australia, was canceled - not the exercise with Australia's navy.

From April 16-18, the website www.gonavy.jp/CVLocation.html reported that the Vinson was in the Indian Ocean.

A U.S. military official, speaking on condition of anonymity, said the Vinson carried out the exercises after passing through the Sunda Strait and wrapped them up this week.