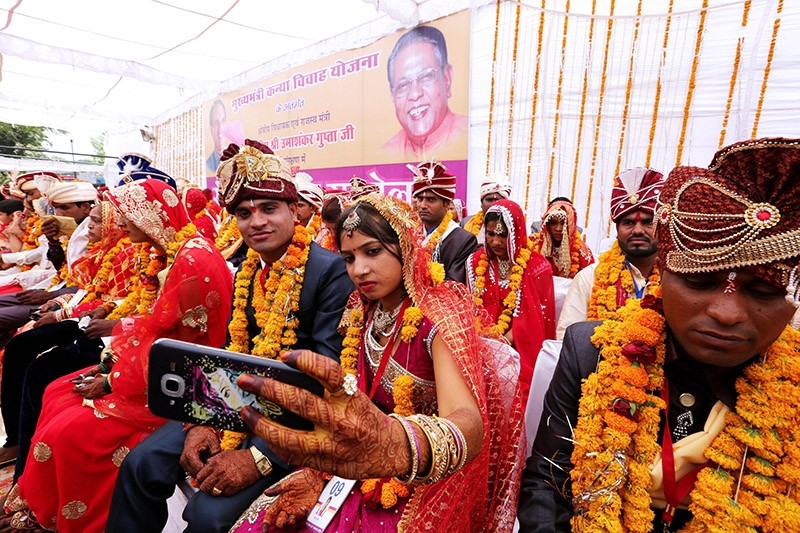 An Indian bride takes a selfie with her husband during a mass marriage ceremony on the occasion of the Akshaya Tritiya festival Bhopal, India, 29 April 2017 (EPA Photo)
by May 01, 2017 12:00 am

Hundreds of brides at a mass wedding in India were gifted wooden paddles by a government minister who urged them to use it on their husbands if they become alcoholics or abusive.

The foot-long wooden paddles, locally known as mogris and commonly used while handwashing clothes, have the message "a gift to beat drunkards, police won't intervene" imprinted on them.

Gopal Bhargava, a minister in the central state of Madhya Pradesh, distributed 700 bats at a wedding for poor couples that he organized in his hometown of Grahakota on Saturday.

"The initiative is to highlight the issue of domestic abuse mainly due to alcoholism as the police is unable to control the menace of illicitly brewed liquor," Bhargava told dpa from state capital Bhopal.

"It has a dual use. Women can use it for washing. If their husbands don't listen to them and continue with physical abuse, these can turn into a weapon for self-defence," Bhargava said.

Bhargava, who is from the ruling Hindu nationalist Bharatiya Janata Party of Prime Minister Narendra Modi, posted photos of the brides with bats on his Facebook page. He said he ordered 10,000 bats for distribution.

Asked if the measure will incite women to violence and lead to police complaints, Bhargava said he will intervene to defend the women.

India has a serious alcohol problem and in several cases women who faced domestic violence have committed suicide, the minister said.

"We will conduct a household survey in a month to assess the impact of this drive. If found effective against drunkards, we will distribute these bats in other regions," Bhargava said.