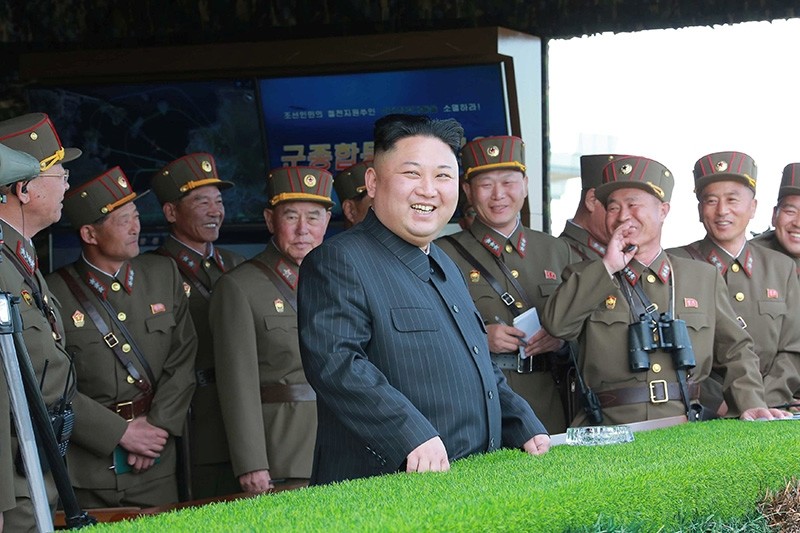 Kim Jong-Un watches a military drill marking the 85th anniversary of the establishment of the Korean People's Army (KPA) in this handout photo by North Korea's Korean Central News Agency (KCNA) made available on April 26, 2017. (Reuters Photo)
by Daily Sabah with Agencies May 01, 2017 12:00 am

Despite rising tensions amid North Korea's missile test threatening the U.S. and its Asian allies Japan and South Korea, U.S. President Donald Trump said Monday that he was open to meeting North Korean leader Kim Jong-Un "under the right circumstances," after having previously referred to the North Korean dictator as a "pretty smart cookie," for clinging to power after his father's death.

"If it would be appropriate for me to meet with him, I would absolutely, I would be honored to do it," Trump told broadcaster Bloomberg in an interview, adding, "under the right circumstances I would meet with him."

Trump had previously said in a Sunday interview with the U.S. broadcaster CBS that Kim Jong-Un was a "pretty smart cookie" for managing to remain in power after his father Kim Jong-Il's death.

"I can tell you this, and a lot of people don't like when I say it, but he was a young man of 26 or 27 when he took over from his father, when his father died. He's dealing with obviously very tough people," Trump said.

"A lot of people, I'm sure, tried to take that power away, whether it was his uncle or anybody else. And he was able to do it," Trump added. "So obviously, he's a pretty smart cookie."

Kim Jong-Un had his uncle Jang Song-thaek executed in 2013, with various rumors about the causes and method surrounding the incident.

The Kim dynasty has uninterruptedly ruled North Korea since 1945, when Kim Jong-Un's grandfather Kim Il-Sung established a socialist regime with the help of Soviet Union, invading the northern half of the country that had suffered 35 years of massacres, repression and assimilation under Japanese rule.

North Korea has proved itself to be one of the most repressive communist regimes among its contemporaries, which has helped it to outlive all of them. The country adopted the nationalistic "Juche" ideology based on a personal cult surrounding the family during the Sino-Soviet split, with the ideology becoming more dominant following the dissolution of the U.S.S.R.