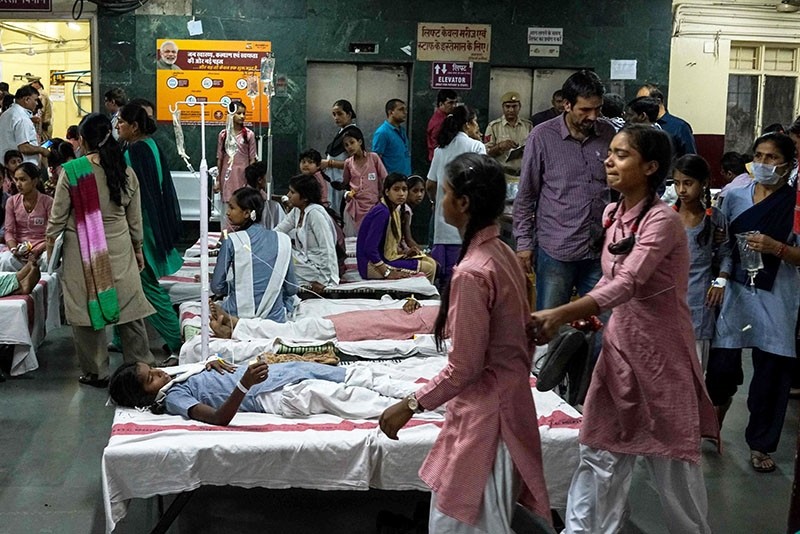 Indian schoolgirls are treated at a government hospital after a gas leak from a nearby container depot in New Delhi. (AFP Photo)
by May 06, 2017 12:00 am

At least 200 pupils of a New Delhi government school were taken to hospital Saturday after a chemical leak from a container depot adjacent to their school, police said.

"The children complained of irritation in the eyes and throat and were immediately evacuated and sent to three hospitals nearby," said Romil Baaniya, deputy commissioner of police.

"More than half of them have been released after checks and their condition is normal," Baniya said.

The Fire Department received a call about the gas leak from a container depot in Tughlakabad, in the south of the national capital, at 7:30 am (0900 GMT).

"We rushed seven fire tenders to the spot. All children and staff at the nearby (Rani Jhansi Sarvodyaya Kanya Vidyalaya) girls' school were evacuated," Rajesh Panwar, deputy fire chief, said.

"The container depot and the school share a boundary wall. We are checking the containers in the depot, the source of the chemical gas leak is not clear."

A teacher said when the children complained of discomfort, they were gathered in the school grounds. "But the smell of gas became stronger and we shifted them out of school and some to the hospitals," the teacher interviewed by NDTV news channel said.

Delhi's deputy chief minister Manish Sisodia, who is in charge of education, said he had ordered an investigation.