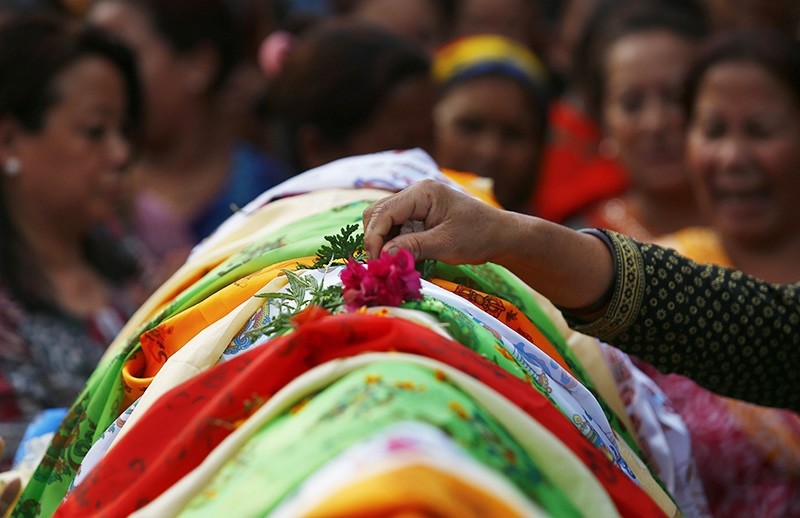 A flower is placed over the dead body of Nepalese mountaineer Min Bahadur Sherchan during his funeral in Kathmandu, Nepal. (EPA Photo)
by Associated Press May 07, 2017 12:00 am

Family and supporters honored Sunday the 85-year-old climber who died attempting to regain his title as the oldest person to scale Mount Everest, while Nepali officials stressed the need to limit the age for such a daunting physical challenge.

The death of Min Bahadur Sherchan has revived concerns about allowing elderly people to attempt scale mountain peaks where the conditions are harsh and oxygen level low.

Under Nepali law, climbers have to be at least 16 years old to climb Everest, but there's no upper limit.

"It is very necessary to immediately bring that age limit law. If there had been a limit, the loss of life could have been prevented," said Ang Tshering, head of the Nepal Mountaineering Association.

The association is planning to push the government to limit the age of climbers to at least 76, he said.

Sherchan died on Saturday evening at the Everest base camp. Another Nepali man, Shailendra Kumar Upadhyaya, died in 2011 at age 82 while attempting to scale Everest.

Dinesh Bhattarai, who heads the Tourism Department, said that the government is seriously discussing limiting the age for elderly climbers.

Sherchan's body was flown by helicopter to Kathmandu on Sunday. The cause of death was still unclear and the autopsy result will be available in a few days.

Sherchan had first scaled Everest in May 2008 when he was 76 — at the time becoming the oldest climber to reach the top. But his record was broken in 2013 by 80-year-old Japanese Yuichiro Miura.

At a funeral ceremony held at the Thakali Service Society premises in Kathmandu, hundreds of family members, friends and supporters offered flowers and colorful scarfs while Buddhist monks chanted a hymn and burnt sandalwood incense.

A government minister and fellow climbers were also among those who paid their respects.

The body was later cremated.

Sherchan is survived by a wife, seven children, 17 grandchildren and six great-grandchildren.