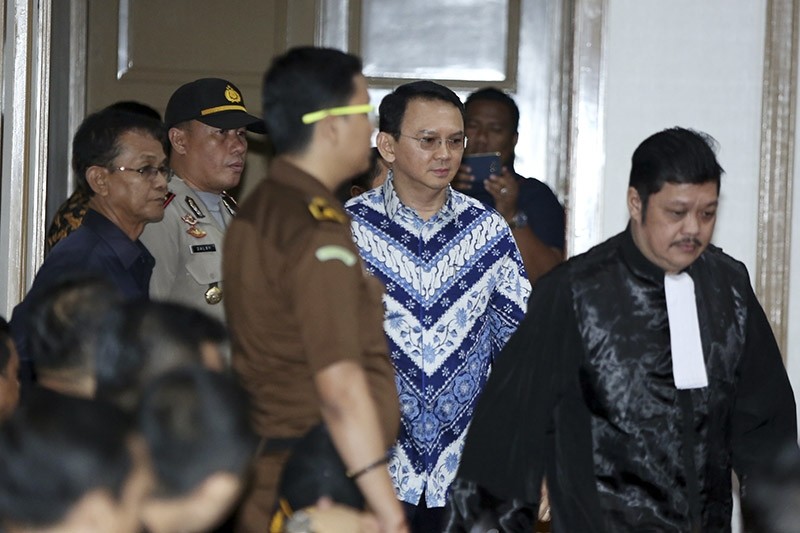 An Indonesian court sentenced the minority Christian governor of Jakarta to two years in prison on Tuesday for blaspheming the Quran.

In announcing its decision, the five-judge panel said Gov. Basuki "Ahok" Tjahaja Purnama was "convincingly proven guilty of blasphemy" and ordered his arrest.

Ahok, Jakarta's first non-Muslim governor for half a century and its first ethnic Chinese leader, looked calm when the verdict was announced and said he would appeal.

He was immediately transferred to jail and authorities said his deputy would take over running Jakarta for the final few months of his term.

The 50-year-old was hauled into court last year to face trial on charges of insulting the Quran while campaigning for re-election, after the blasphemy accusations sparked a series of mass protests in Jakarta.

The two-year prison sentence was a surprise outcome after prosecutors had recommended two years of probation. The maximum sentence for blasphemy in Indonesia is five years in prison.

The lead judge, Dwiarso Budi Santiarto, said the trial was a purely criminal one and that the court disagreed that there were political aspects to the case.

He said Ahok's comments during the election campaign had degraded and insulted Islam.

"As part of a religious society, the defendant should be careful to not use words with negative connotations regarding the symbols of religions including the religion of the defendant himself," he said.

Ahok rose from deputy governor in 2014 after Jokowi vacated the capital's governorship following his victory in Indonesia's presidential election that year.

He was popular with Jakarta's middle class for efforts to stamp out corruption and make the teeming city more livable. But others were alienated by Ahok's outspokenness and the demolition of slums that were home to Jakarta's poorest residents.

Indonesia, 90 percent of whose 255 million people are Muslim, has a long tradition of pluralistic values and is home to substantial populations of Christians, Hindus and Buddhists.