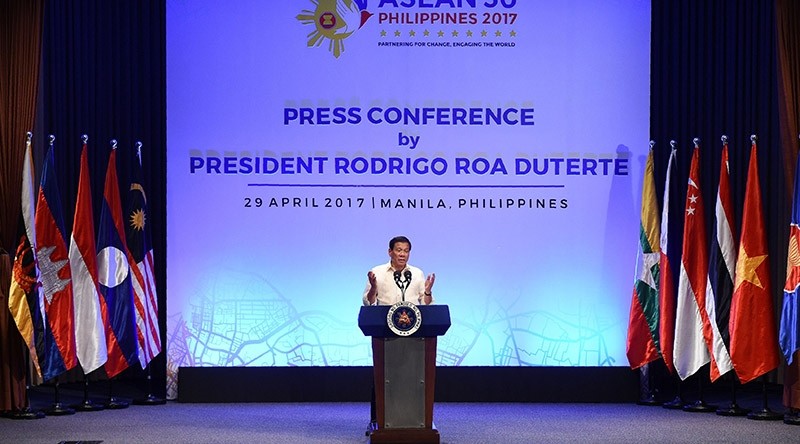 Philippines' President Rodrigo Duterte gestures as he speaks during a press conference at the end of Association of Souteast Asian Nations (ASEAN) leaders' summit in Manila on April 29, 2017 (AFP Photo)
by May 16, 2017 12:00 am

Philippine President Rodrigo Duterte said on Tuesday he would push for the inclusion of Turkey and Mongolia in a grouping of Southeast Asian nations, dismissing concerns about their geographic location.

Duterte said leaders of Turkey and Mongolia told him about their desire to join the Association of Southeast Asian Nations (ASEAN) while they were in China over the weekend for a summit on a global trade infrastructure project.

"They want to join ASEAN and since I am now the chair, the Philippines is, they wanted me to sponsor their entry and I said, 'Yes, why not,'" Duterte told reporters in the Philippines.

A NATO member bordering the Middle East, Turkey straddles Europe and Asia. It's application for membership of the European Union has been bogged down for years.

Mongolia is a landlocked nation wedged between China and Russia.

Geographic location is the first criterion for ASEAN membership, along with recognition by all other members.

Duterte said Myanmar's de facto leader Aung San Suu Kyi, who also attended the summit in China, asked him if he had considered geography in deciding to sponsor Turkey and Mongolia's ASEAN membership.

However Duterte insisted that the two nations were part of the region.

"They are. I would say that they are," Duterte said.

There was no immediate response to a request for comment from the ASEAN Secretariat, which is based in Indonesia.

Countries within the region like East Timor and Papua New Guinea have for years sought ASEAN membership but only hold observer status.