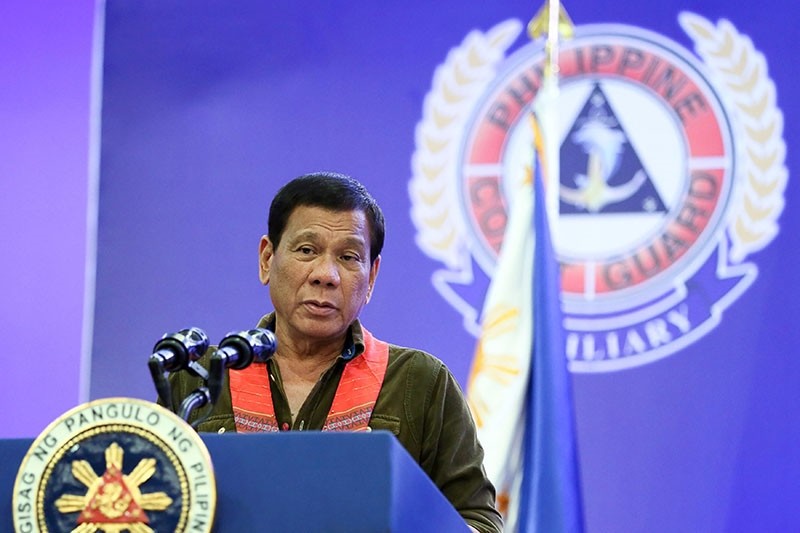 China has warned the Philippines it would go to war if Manila insists on enforcing a tribunal's ruling that invalidated Beijing's sweeping claims in the disputed South China Sea, Philippine President Rodrigo Duterte said Friday.

In a televised speech at a coastguard event, Duterte said Chinese President Xi Jinping urged him to not "force the issue" and to maintain the "warm relationship" between the two countries.

"I said, 'Mr Xi Jinping, I would insist that that is ours and I will drill oil there," Duterte recounted. "I said it straight to his face ... He said, 'Please do not do that, because that is ours.'"

Duterte said he then countered Xi by referring to the 2016 arbitral tribunal ruling in The Hague that China has no historic or legal basis for its sweeping claims. This ruling is not recognized by Beijing.

According to Duterte, Xi responded, "Well if you force this, we'll be forced to tell you the truth ... We will go to war. We will fight you."

The 72-year-old Philippine leader said he was making the threat public to dispel allegations by critics, including former foreign affairs officials, that he was being soft in dealing with China with regards to the dispute.

Earlier in the day, senior officials from China and the Philippines met in the Chinese province of Guizhou for the first round of bilateral talks on the South China Sea dispute.

"Both sides agree to continue discussions on confidence-building measures to increase mutual trust and confidence and to exercise self-restraint in the conduct of activities in the South China Sea that would complicate or escalate disputes and affect peace and stability," a joint statement said.

The officials agreed to hold the talks regularly and to also "explore other areas of cooperation," according to the statement.

The next round of talks will be held in Manila later this year, it added.

China claims almost the entire South China Sea, a key shipping lane that is believed to be rich in marine and mineral resources. The Philippines, Brunei, Indonesia, Malaysia, Vietnam and Taiwan also have claims to the sea.