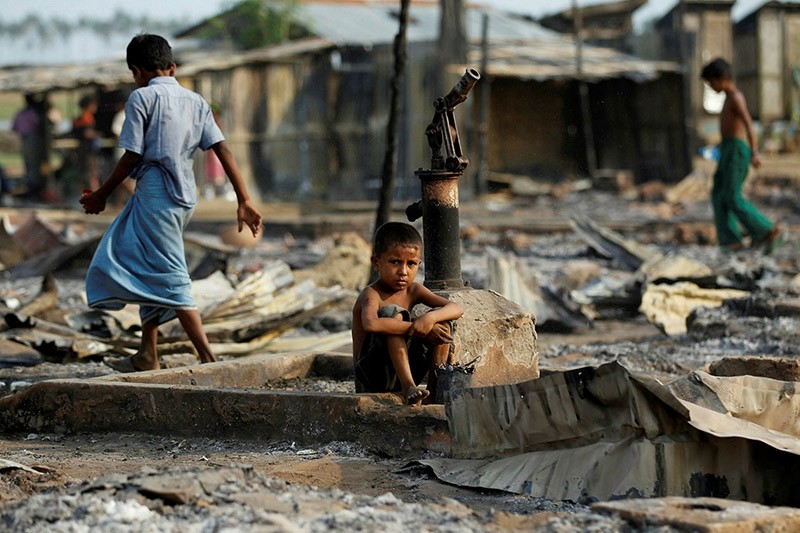 A boy sit in a burnt area after fire destroyed shelters at a camp for internally displaced Rohingya Muslims in the western Rakhine State near Sittwe, Myanmar May 3, 2016. (Reuters Photo)
by Compiled from Wire Services May 23, 2017 12:00 am

Myanmar's army on Tuesday rejected allegations of human rights abuses during its crackdown on Rohingya Muslim last year, made by the United Nations in a report on the offensive that forced some 75,000 Rohingya to flee to neighboring Bangladesh.

In a report released in February they said security forces may have committed atrocities so severe they amount to crimes against humanity and ethnic cleansing.

But on Tuesday the military said the results of its own investigation, led by army chief Aye Win, showed those charges were "false and fabricated".

It said military investigators, among others, interviewed nearly 3,000 villagers from 29 villages and "wrote down" testimony from 408 villagers, 184 military officers and troops.

Three low-ranking soldiers were jailed for minor offenses, such as stealing a motorbike or beating up villagers in one incident, it added.

Both the military and the civilian government led by Nobel peace prize winner Aung San Suu Kyi have denied allegations of widespread atrocities against the Rohingya and refused to allow in a UN fact-finding mission to investigate.

Instead the government, police and military have launched their own probes into the violence. These have been roundly criticized by rights groups as biased and lacking credibility.

The Rohingya, stripped of citizenship by Myanmar's then-military leaders in 1982, are loathed by many in the Buddhist-majority country, who claim they are illegal immigrants from Bangladesh and refer to them as "Bengalis".