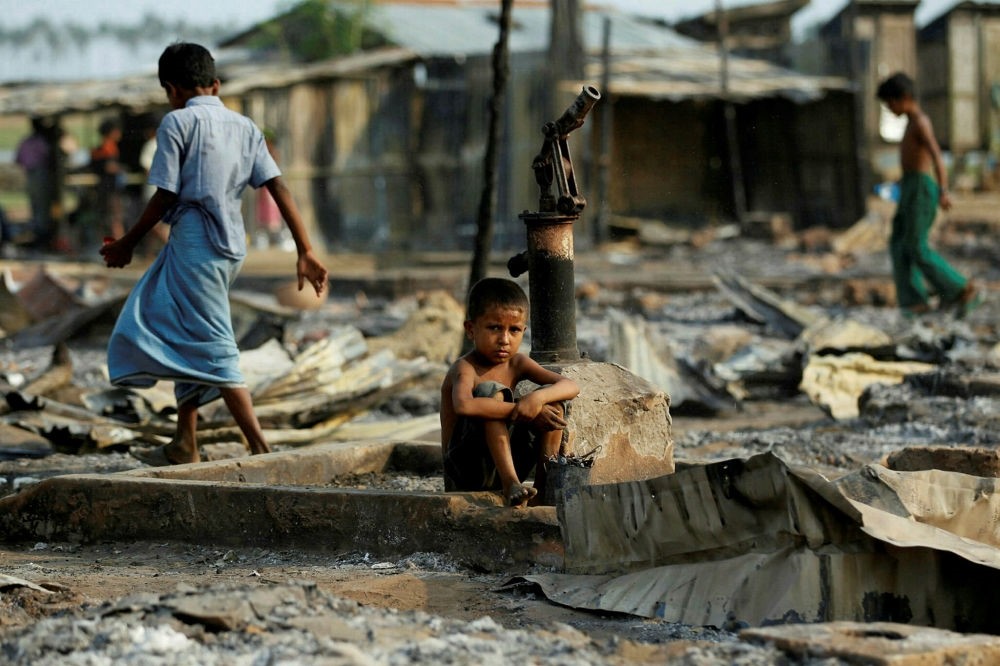 A boy sit in a burnt area after fire destroyed shelters at a camp for internally displaced Rohingya Muslims in the western Rakhine State near Sittwe, Myanmar.
by Compiled from Wire Services Jul 01, 2017 12:00 am

Myanmar will refuse entry to members of a United Nations probe focusing on allegations of killings, rape and torture by security forces against Rohingya Muslims, an official said on Friday. The government led by Nobel laureate Aung San Suu Kyi had already said it would not cooperate with a mission set up after a Human Rights Council resolution was adopted in March.

"If they are going to send someone with regards to the fact-finding mission, then there's no reason for us to let them come," said Kyaw Zeya, permanent secretary at the Ministry of Foreign Affairs in the capital, Naypyitaw.

"Our missions worldwide are advised accordingly," he said, explaining that visas to enter Myanmar would not be issued to the mission's appointees or staff.

Suu Kyi, who came to power last year amid a transition from military rule, leads Myanmar through the specially created position of "State Counsellor", but is also minister of foreign affairs.

Suu Kyi has been criticized for failing to stand up for the more than 1 million stateless Rohingya Muslims in the western state of Rakhine.

A U.N. report in February, based on interviews with some of the Rohingya refugees, said the response involved mass killings and gang rapes of Rohingya, and "very likely" amounted to crimes against humanity and possibly ethnic cleansing.

Myanmar dissociated itself from the March resolution brought by the European Union, which called for a mission to look into the allegations in Rakhine as well as reports of abuses in ethnic conflicts in the north of the country.

Since mid-2012, the region has seen a series of incidents of communal violence between ethnic Rakhine Buddhists and Rohingya, which have left around 100 people dead and some 120,000 displaced in camps – mostly members of the Rohingya minority.

Myanmar has long faced international condemnation for its persecution of the country's Muslim Rohingya minority in Rakhine state. Fresh violence erupted in Rakhine last October after nine border police were killed. A United Nations report issued earlier this year said Myanmar's security forces had committed mass killings and gang rapes of Rohingyas during their campaign against the insurgents, which could amount to crimes against humanity.

The military has denied the accusations, saying it was engaged in a legitimate counterinsurgency operation. Myanmar has launched its own domestic probe into possible crimes in Rakhine and appointed former U.N. Secretary-General Kofi Annan to head a commission tasked with healing long-simmering divisions between Buddhists and Muslims. Rohingya who fled the crackdown told U.N. workers of horrendous abuses, including soldiers allegedly executing infants in front of their mothers, summary murders of men and widespread gang rape of women.