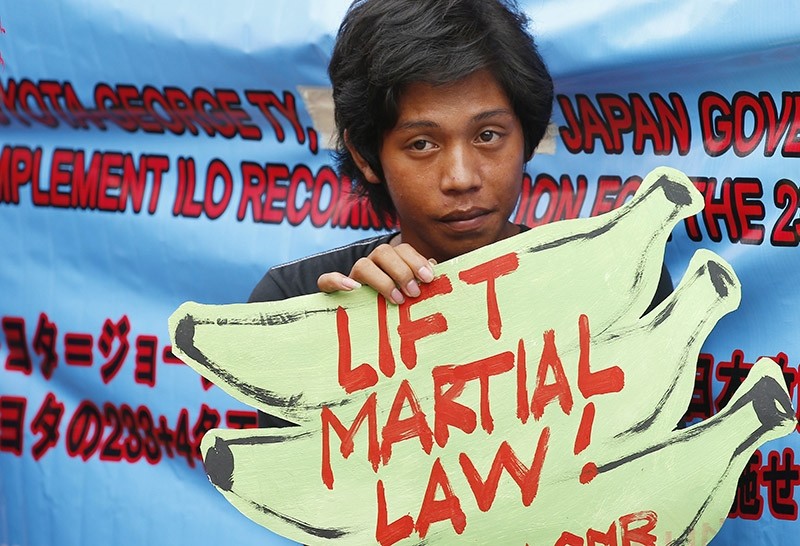 A protester holds a placard to protest the extension of martial law on Mindanao island in southern Philippines, July 18, 2017, in Manila, Philippines. (AP Photo)
by Compiled from Wire Services Jul 18, 2017 12:00 am

President Rodrigo Duterte has asked lawmakers to extend martial law in the southern Philippines as the initial two-month limit approaches with no end in sight to the battle for control of a major city seized by an Daesh-aligned force.

Duterte imposed military rule for 60 days in the Mindanao region, home to 20 million people, on May 23 when gunmen waving black Daesh flags occupied Marawi city, triggering clashes that have killed more than 500 people.

But with scores of militants holding out against government forces, Duterte met with lawmakers late Monday and asked them to extend the law when it lapses on Saturday, spokesman Ernesto Abella said.

"I have come to the conclusion that the existing rebellion in Mindanao ... will not be completely quelled by 22nd July," the last day of the 60-day period, Duterte said in a letter to leaders of Congress.

"For this reason, and because public safety requires it, I call upon the Congress to extend until 31st December 2017 or for such a period of time as the Congress may determine the proclamation of martial law and the suspension of the privilege of writ of habeas corpus in the whole of Mindanao," he added.

The country's constitution allows the president to impose martial law for up to 60 days, enabling him to "call out the armed forces to prevent or suppress lawless violence, invasion or rebellion".

Beyond two months, the president can extend it "for a period to be determined by the Congress".

In May, Duterte said he had made the move to stamp out an attempt by militants, including foreign fighters, to establish an Daesh rule on Philippine territory.

"He also explained clearly his fear that terrorism might slowly spread throughout Mindanao and eventually the country," Senator Sherwin Gatchalian, who attended the meeting with Duterte on Monday, told AFP.

Duterte told the legislators 600 buildings had yet to be cleared of bombs or armed men, Senator Joseph Victor Ejercito told AFP.

Security forces have been conducting a U.S.-backed offensive to root out the gunmen, using air strikes and artillery fire.

On Tuesday, U.S. Ambassador to Manila Sung Kim said his government would give the Philippine military two Cessna planes to be used in Marawi.

"We are deeply concerned about the security situation in Marawi," Kim told ABS-CBN television.

"The Marawi situation is clearly a very difficult situation for the Philippines so we are going to do everything possible to support the (armed forces)."

Martial law is a sensitive issue in the Philippines, bringing back memories of the 1970s rule of late dictator Ferdinand Marcos, who was accused of exaggerating security threats to justify measures that allowed his regime to suppress dissent brutally.

Duterte has praised Marcos on numerous occasions and critics say he relishes being likened to a dictator, which plays into his tough image.

Congressman Edcel Lagman said the public should be worried that Duterte, who had promised martial law would be "harsh", was asking for an extension that went far beyond the 60-day period stated in the constitution.