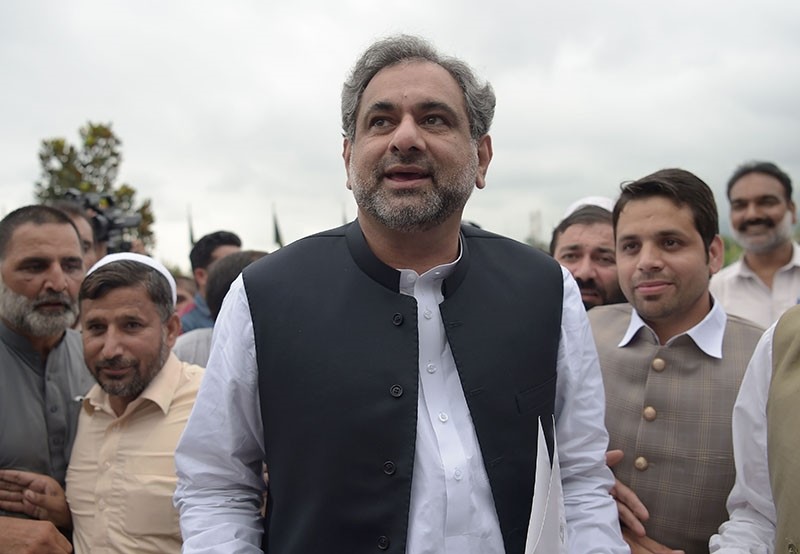 Pakistan's former petroleum minister and prime minister-designate Shahid Khaqan Abbasi arrives at the Parliament House to casts his vote during the election for interim prime minister in Islamabad on August 1, 2017. (AFP Photo)
by Compiled from Wire Services
Aug 01, 2017 12:00 am

Abbasi is seen by the ruling party as a placeholder for Sharif's designated successor, his younger brother Shahbaz, who must first secure election to the 342-member National Assembly.

Sadiq said Abbasi's closest rival Syed Naveed Qamar from the opposition Pakistan People's Party got 47 votes in the house of 342.

Lawmakers chanted slogans in favor of Abbasi and Sharif as Sadiq announced the result.

"I give the floor to the new prime minister of Pakistan," Sadiq said as Abbasi took his place in the premier's seat.

"I am thankful to all those who took part in this democratic process," Abbasi said. "Those who were in favour, those who opposed me. This is the procedure in democracy. And I am also thankful to PML-N who nominated me for this post. Of all these, I am most thankful to Nawaz Sharif."

Abbasi said he could say with full confidence that Sharif was not involved in corruption, as claimed by his political opponents, adding that legal experts were also surprised by Friday's court decision to disqualify Sharif.

Abbasi has asked his countrymen to pay their taxes honestly as he plans to take stern action against those involved in tax evasion, promising better health and education facilities for his countrymen.

Abbasi said he would ensure rule of law and that he would run the country strictly according to the constitution.

Shabhaz Sharif, currently chief minister of Punjab province, plans to enter parliament by contesting the seat left vacant by his elder sibling before eventually taking over the premiership.

The constitution requires a candidate for prime minister to win a majority from the National Assembly, the lower house of parliament.

But Abbasi, a long-time Sharif loyalist, won easily as the PML-N commands a majority in parliament with 188 out of 342 seats.

Nawaz Sharif was the 15th prime minister in Pakistan's 70-year history -- roughly half of which was spent under military rule -- to be ousted before completing a full term.

The top court sacked him Friday after an investigation into corruption allegations against him and his family, bringing his historic third term in power to an unceremonious end and briefly plunging the nuclear-armed nation into political instability.

Abbasi is the former federal minister for petroleum and natural resources, and a businessman who launched the country's most successful private airline, Air Blue.

Educated in the U.S. at George Washington University, he worked in the US and Saudi Arabia as an electrical engineer before joining politics and being elected to the National Assembly six times.

He was arrested after the 1999 military coup led by General Pervez Musharraf which ended Nawaz Sharif's second term as PM, and imprisoned for two years before being released.

Shahbaz Sharif went into exile in Saudi Arabia along with Nawaz after Musharraf's coup.

He returned to Pakistan in 2007 and was elected chief minister in the family's power base of Punjab in 2008, becoming the longest serving top official in the province.

A tough administrator with a reputation for passionate outbursts, he is known for using revolutionary poetry in speeches and public meetings and considered by some to be a workaholic.

His scandalous relationships fueled headlines in the past, but his marriage to the author Tehmina Durrani, who is his fifth wife, in 2003 has since dampened the media frenzy.

Shahbaz Sharif has been so far largely unscathed by the claims about the lavish lifestyles and luxury London property portfolio of the Sharif dynasty which have played out for months in the raucous news media.

It was an investigation into the claims, which first erupted with the Panama Papers leak last year, that eventually saw the Supreme Court oust Nawaz Sharif. He and his family have denied the accusations.