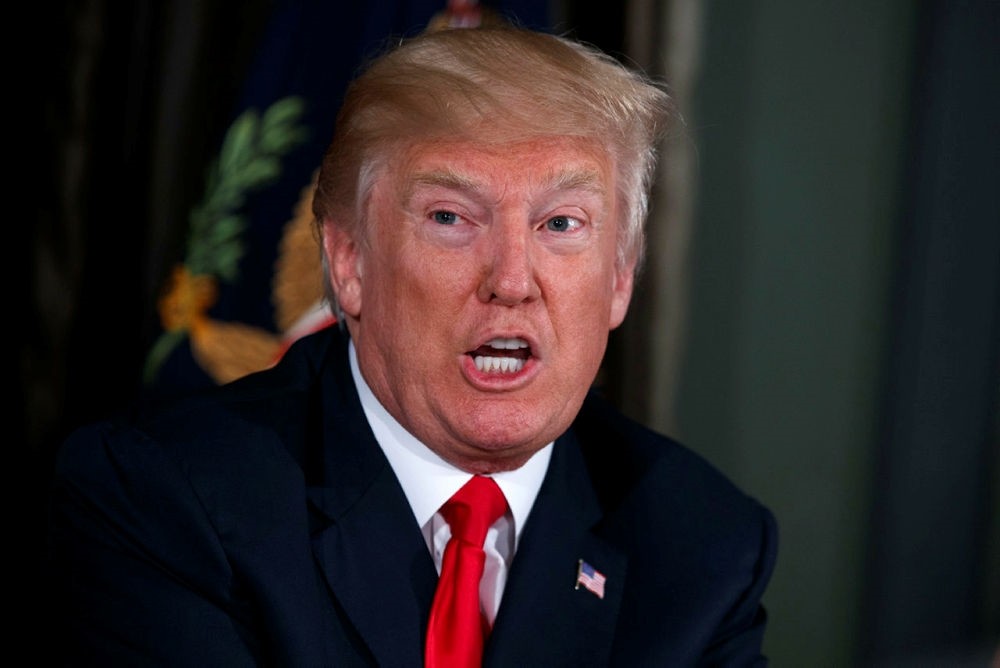 President Donald Trump warned North Korea that it could face "fire and fury" after a new report Tuesday said U.S. intelligence believes Pyongyang has successfully produced a nuclear warhead that can fit inside its missiles.

The latest report that it has produced a miniaturized nuclear warhead would mean North Korea has passed a key threshold in becoming a full-fledged nuclear power.

"North Korea had best not make any more threats to the United States. They will be met with fire and fury like the world has never seen," Trump said during a briefing on opioid addiction at his golf course in Bedminster, New Jersey.

He also said North Korean leader Kim Jong-Un "has been very threatening beyond a normal state."

Japan's Defense Ministry concluded in an annual white paper released Tuesday that "it is possible that North Korea has achieved the miniaturization of nuclear weapons and has developed nuclear warheads." Japan, a key U.S. ally, is also a potential target of North Korean aggression.

A report in The Washington Post on Tuesday went further. The newspaper said U.S. intelligence officials have assessed that a decade after North Korea's first nuclear test explosion, Pyongyang has produced nuclear weapons for ballistic missile delivery, including by intercontinental missiles — the type capable of reaching the continental U.S.

Officials at the agency would not comment Tuesday on the report. The Office of the Director of National Intelligence has not commented.

Pentagon spokesman Lieutenant Colonel Chris Logan said the United States seeks a peaceful de-nuclearization of the Korean Peninsula, but he warned military action is never off the table.

"We remain prepared to defend ourselves and our allies and to use the full range of capabilities at our disposal against the growing threat from North Korea," Logan said.

Experts had until last month said it would still take another two or three years for North Korea to develop a nuclear-tipped ICBM. But that calculus suddenly changed after Pyongyang last month tested two ICBMs -- the first time Kim had demonstrated such a capability.

The first of these trials, which Kim described as a gift to "American bastards," showed the rocket had the potential range to hit Alaska.

The second rocket tested last week flew even longer, with some experts even suggesting that New York could be vulnerable.

The Post also reported that another intelligence assessment estimated that North Korea now has up to 60 nuclear weapons, more than previously thought.

Despite the advance, North Korea still must overcome technical hurdles before it can claim to have perfected its nuclear weapons technology.

After Kim's second ICBM test, experts said it appeared the "re-entry vehicle" that would carry a warhead back into Earth's atmosphere from space had failed.

Without proper protection during a re-entry stage, a missile's warhead could burn up.

"North Korea likely made some of the key measurements required to define those extreme conditions during the two July tests, but I can't imagine it has learned enough to confidently make a warhead that is small and light enough and sufficiently robust to survive," Stanford University expert Siegfried Hecker said in an interview with the Bulletin of the Atomic Scientists.

The former Los Alamos National Laboratory director said he did not think North Korea yet has sufficient missile or nuclear test experience "to field a nuclear warhead that is sufficiently small, light and robust to survive an ICBM delivery."

News that Kim appears to have produced a small nuclear warhead comes as international tensions around Pyongyang's program ratchet up ever higher.

"Especially since last year, when it pushed ahead with two nuclear tests and launched more than 20 ballistic missiles, it has posed a new level of threat," Japan's defense ministry said in an annual report that also reiterated concerns over China's increasing military posture.

Japan, which lies across the sea from North Korea, has been wary for decades over its missile development as well as Pyongyang's history of abducting Japanese citizens to train its spies.

The most recent ICBM test saw the failed re-entry vehicle splash down into waters off Japan's Hokkaido island.

North Korea has vowed that tough new U.N. sanctions agreed over the weekend would not stop it from developing its nuclear arsenal, rejecting talks and angrily threatening retaliation against the United States.

The milestone comes as global alarm continues to mount over the accelerating pace of North Korea's weapons program, with Japan calling recent steps a "new level of threat."