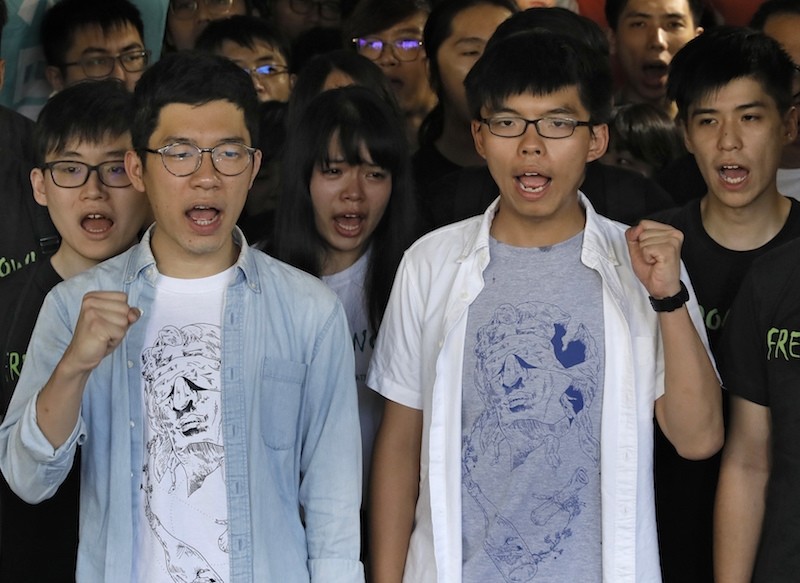 A Hong Kong appeals court overturned sentences that the prosecution said were too light Thursday, sentencing three leaders of the pro-democracy movement for six to eight months in prison, a blow to the Chinese-ruled city's youth-led push for universal suffrage.

Wong was jailed for six months, Chow for seven months and Law for eight months. Law had been the city's youngest ever democratically elected legislator before he was stripped last month of his seat by a government-led lawsuit.

The three appeared stern but calm as their sentences were delivered by a panel of three judges.

The former British colony, which has been governed under a "one country, two systems" formula since it was returned to Chinese rule in 1997, was rocked by nearly three months of mostly peaceful street occupations in late 2014, demanding Beijing grant the city full democracy.

The so-called "Umbrella Movement" civil disobedience movement, that drew hundreds of thousands of protesters at its peak, was triggered after Wong and his colleagues stormed into a courtyard fronting the city's government headquarters.

They were later charged with participating in and inciting an unlawful assembly.

Just before sentencing, a defiant Wong told around one hundred supporters who thronged into the High Court lobby, some weeping, that he had no regrets and urged them to keep fighting for full democracy.

Wong also told Reuters earlier that Hong Kong's democratic movement was facing its "darkest era" and that he'd lost confidence in the city's vaunted legal system, long considered one of the best in Asia.

The Department of Justice said in an earlier statement that the trio were not convicted for exercising their civil liberties, but because their conduct during the protest included "disorderly and intimidating behaviour".

It added there was "absolutely no basis to imply any political motive".

"The outlandish application seeking jail time is not about public order but is instead a craven political move to keep the trio out of the Legislative Council, as well as deter future protests," China director at Human Rights Watch, Sophie Richardson, said in a statement on Wednesday.

Hong Kong enjoys a free judiciary, unlike on the mainland where the Communist Party controls the courts which rarely challenge its decisions.

The jail terms will curtail the political ambitions of the trio, barring them for running for seats in the legislature for the next five years.

In recent months, dozens of protesters, mostly young people, have been jailed for their roles in various protests, including a violent demonstration that the government called a riot in early 2016.