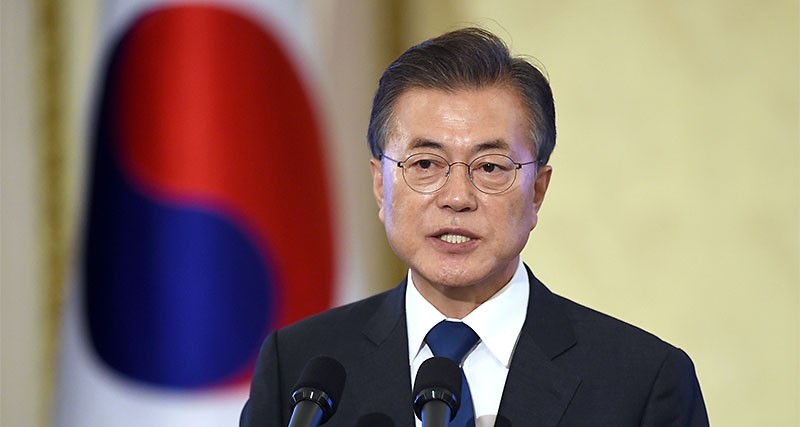 South Korea's President Moon Jae-In speaks during a press conference marking his first 100 days in office at the presidential house in Seoul. (AFP Photo)
by Associated Press Aug 17, 2017 12:00 am

In an effort to jumpstart diplomacy, South Korean President Moon Jae-in said Thursday he would consider sending a special envoy to North Korea for talks if the North stops its missile and nuclear tests.

He also declared, amid fears in South Korea that threats from President Donald Trump to unleash "fire and fury" on Pyongyang could lead to real fighting, that there would be no second war on the Korean Peninsula.

"The people worked together to rebuild the country from the Korean War, and we cannot lose everything again because of a war," Moon said in a nationally televised news conference. "I can confidently say there will not be a war again on the Korean Peninsula."

Moon's comments follow a spike in animosity generated by North Korea's warning that it might send missiles into waters near the U.S. territory of Guam, and Trump's warlike language. Both Koreas and the United States have signaled in recent days, however, a willingness to avert a deepening crisis, with each suggesting a path toward negotiations.

"The alternative would have been both catastrophic and unacceptable!" Trump wrote.

Next week's start of annual U.S.-South Korean military exercises that enrage the North each year could make diplomacy even more difficult.

Moon was elected in May after a near-decade of conservative rule that saw animosity deepen between the rival Koreas. Moon wants to engage the North. But his efforts have so far been met with a string of threats and missile tests as the North works to build nuclear-armed missiles that can reach the U.S. mainland.

"A dialogue between South and North Korea must resume. But we don't need to be impatient," Moon said. "I think lots of effort and time could be necessary to overcome a decade of severed ties and to reopen a dialogue."

Moon said Washington and Seoul are closely communicating over the North Korean nuclear problem and share the view that strong sanctions and pressure are needed against Pyongyang to stop its provocations and force it into negotiations to give up its nukes. Moon said he thinks Trump's belligerent words are intended to show a strong resolve for pressuring the North and don't necessarily display the willingness for military strikes.

North Korea's threats against Guam and its advancing missile capabilities, highlighted by a pair of intercontinental ballistic missile flight tests in July, have raised security jitters among many South Korean who worry that a fully functional ICBM in Pyongyang would force the United States to rethink whether to trade New York or Washington for Seoul in the event of a war on the peninsula.

Lobbing missiles toward Guam, a major U.S. military hub in the Pacific, would be deeply provocative from the U.S. perspective. A miscalculation on either side could lead to military confrontation.

Chinese Foreign Minister Wang Yi said in a phone conversation with his Russian counterpart, Sergey Lavrov, earlier this week that the two countries should work together to contain tensions and permit no one to "stir up an incident on their doorstep," according to a statement posted on the Chinese foreign ministry's website.

"The most important task at hand is for the U.S. and North Korea to 'hit the brakes' on their mutual needling of each other with words and actions, to lower the temperature of the tense situation and prevent the emergence of an 'August crisis,'" Wang was quoted as saying in the Tuesday conversation.

"A resolution of the North Korea nuclear issue by military force is completely unacceptable and the peninsula's nuclear issue must be peacefully resolved by political and diplomatic methods," Lavrov was quoted as saying.

China is North Korea's main economic partner and political backer, although relations between the two countries have deteriorated amid the North's continuing defiance of China's calls for restraint. In recent months, China has joined with Russia in calling for the U.S. to suspend annual military drills with South Korea in exchange for Pyongyang placing a moratorium on new missile and nuclear tests as a first step toward direct talks.

During an inspection of the North Korean strategic rocket forces earlier this week, Kim praised the military for drawing up a "close and careful plan" but said he would watch how Washington acts before deciding whether to go ahead with his Guam missile test plans, according to state media.

In an interview, Trump's chief strategist Steve Bannon said there's no military solution to the threat posed by North Korea and its nuclear ambitions. The White House did not immediately respond to requests for comment.

"There's no military solution (to North Korea's nuclear threats), forget it," Bannon said in an interview with The American Prospect. "Until somebody solves the part of the equation that shows me that 10 million people in Seoul don't die in the first 30 minutes from conventional weapons, I don't know what you're talking about, there's no military solution here, they got us."

U.N. Secretary-General Antonio Guterres said tensions on the Korean peninsula are at their highest level in decades and it's important "to dial down the rhetoric and to dial up diplomacy."