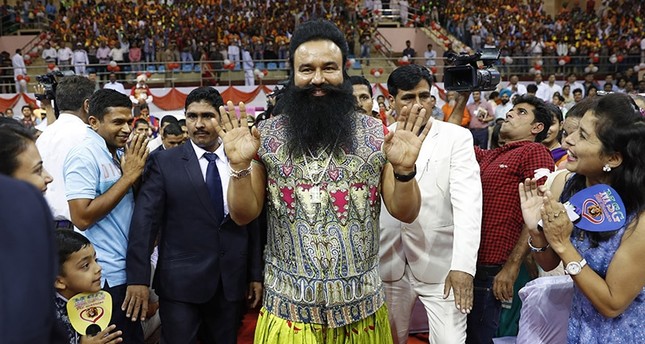 In this Oct. 5, 2016 file photo, Indian spiritual guru who calls himself Saint Dr. Gurmeet Ram Rahim Singh Ji Insan, center, greets followers as he arrives for a press conference ahead of the release of his new movie in New Delhi, India. (AP Photo)

An Indian judge sentenced a self-styled "godman", whose followers went on a deadly rampage after he was convicted of rape last week, to 20 years' jail on Monday, but a shoot-to-kill order, curfew and heavy police presence kept protesters at bay.

A spokesman for the Central Bureau of Investigation, which investigated the case, said late on Monday that Gurmeet Ram Rahim Singh would serve two consecutive 10-year-terms for the two rape convictions.

Reuters and other media had earlier quoted government officials and lawyers as saying that the twin sentencing would run concurrently for 10 years.

The sentence was pronounced amid intense security at a prison in the northern town of Rohtak where the guru, who calls himself Dr. Saint Gurmeet Singh Ram Rahim Insan, has been held since his conviction Friday.

The conviction sparked violent protests by the guru's followers that left at least 38 people dead and hundreds injured.

A lawyer for the victims in the case, which dates back to 1999, confirmed Monday's sentence and said there could be dozens more cases of abuse involving women at the sect.

"We will file two appeals shortly. One for enhancement of the punishment and another for further investigation into the case," Utsav Singh Bains told AFP by phone.

"We believe there are at least 48 more victims who were sexually abused and who may have been killed or are too scared to come out and testify against Ram Rahim."

Bains said the prosecution wanted the court to jail Singh for life -- the maximum possible sentence for rape in India -- given that there were two victims and one was a minor.

The minimum sentence for his crimes was seven years and the maximum was life in prison.

Ahead of the sentencing announcement, train and bus services to Rohtak were suspended to prevent the guru's supporters from gathering in the town, located in Haryana state. A curfew was also imposed in Rohtak.

Local police said that several layers of security were in place around the prison and that government troops had permission to use firearms if any violence erupted. All cars entering the town were being searched.

More than 100 of Singh's senior loyalists have been placed in detention as a precautionary measure, said Rohtak police chief Navdeep Singh Virk.

He said his officers would use "whatever force is required" against the guru's devotees should they again resort to violence.

"If the situation so arises that (we) need to use firearms, my officers have complete authority," the police chief told broadcaster NDTV.

A judge was flown in by helicopter to sentence the spiritual leader, known as the "guru in bling" for his penchant for bejewelled costumes.

The rape case was brought after an anonymous letter was sent to then-prime minister Atal Bihari Vajpayee in 2002, accusing Singh of repeatedly raping the sender and several other women in the sect.

A judge asked the federal Central Bureau of Investigation to look into the accusations, but it took years to trace the alleged victims and it was not until 2007 that two women came forward and filed charges.

Singh also stood trial for conspiracy over the murder in 2002 of a journalist investigating the rape allegations. He denied the charge and the case is ongoing.

On Friday the journalist's son Anshul Chhatrapati welcomed the sentence on Singh, saying the court had "sent a message that any charlatan, however big he may be, is not above the law".

Critics say Haryana authorities grossly underestimated the risk posed by the army of devotees after violent protests in many parts of the northern state on Friday.

Over the weekend thousands of followers congregated in the spiritual headquarters of his sect at Sirsa, despite calls from police and troops for them to disperse.

Devotees eventually began trickling out one by one from the compound Sunday, under the supervision of hundreds of soldiers and riot police.

Modi said Sunday it was "natural to be worried" as the violence even briefly reached the capital New Delhi.

"Violence is not acceptable in the nation, in any form," he said in his monthly radio address.

"Those who take law in their hands or take to violence will not be spared, whoever they are."

Followers of the self-styled "godman" continue to insist upon his innocence.

Singh's sect claims to have about 50 million followers and campaigns for vegetarianism and against drug addiction. It also organizes blood-donation and tree-planting drives, but he is no stranger to controversy.

In 2015 he was accused of encouraging 400 followers to undergo castration at his ashram so they could get closer to god.

Share on Facebook Share on Twitter
Previous in Asia Pacific Philippine President Rodrigo Duterte told police on Monday they could... Next in Asia Pacific Between 2,000 and 3,000 Muslims were killed in Myanmar's Rakhine state...
DAILY SABAH RECOMMENDS