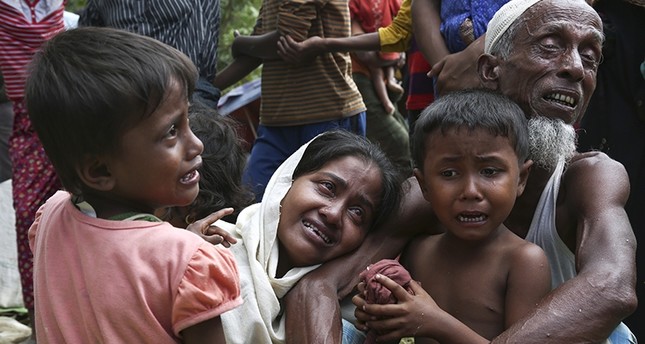 A group of Muslim Rohingyas in Ghumdhum, Cox's Bazar weep as Bangladesh border guards (not pictured) order them to leave their makeshift camp and force them out of the country, Aug. 28, 2017. (AP Photo)

An independent commission must investigate recent atrocities against the Muslim community in Myanmar, a London-based human rights organization has urged Myanmar's government.

"It is noteworthy that the Commission has stressed to address the Rohingya problem and their 'legitimate concerns' without use of force, and warned of radicalization if not executed swiftly," ARNO said.

Speaking to Anadolu Agency, ARNO President Nurul Islam urged "the attention of the UN and the international community, powerful countries, the OIC, ASEAN and Myanmar's neighbors to bring consistent pressure to bear on the Myanmar government and the military".

Describing the latest army deployment and nationwide anti-Muslim protests a "conspiracy", Islam said: "Rakhine leaders and military leadership are annoyed over the report of Annan's commission" and therefore "this military crackdown under the pretext of so-called security measures with a view to frustrate the commission's report, to further destroy the Rohingya minority and to cause a fresh exodus into Bangladesh."

"It is to prevent a peaceful solution of the Rohingya problem," he added.

This came after lawmakers "failed to pass a proposal in parliament to send more soldiers, what they said, for the security of northern Arakan from so-called Islamic terrorists, and to protect their people [the Rakhine ethnic group] although it was supported by all the military parliamentary representatives".

Islam said an army battalion was deployed in Rohingya areas "using helicopters, tanks and gunships [and] terrorizing the Muslim community" on Aug. 11.

The move was followed by demonstrations staged by Buddhist monks and members of the Rakhine ethnic group in 15 towns across Arakan "accusing the UN and other international organizations of favoring Rohingya and demanding they leave the Arakan State," Islam continued.

"On 23 and 24 Aug. almost all Rohingya men from Auk Nan Yar (Razar Bil) in Rathedaung township were seized and carried away by the armed forces leaving vulnerable women, children and the elderly.

"There were reports of the rape of women. Rakhine extremists have cordoned the village under the patronage of the army.

"Then the army started mass atrocities against the Rohingya, raiding villages one after another.

"This is a clear conspiracy," Islam said.

ARNO, in a statement, said: "The armed forces have created an extreme situation that caused the latest unwanted clashes from last Friday between soldiers and a Rohingya armed group, moments after former UN chief Kofi Annan suggested Myanmar's government immediately put an end to all restrictions on the basic freedoms of Rohingya, ensure their rights and freedoms, and grant their citizenship."

"The rejection of the UN fact-finding mission by the government of Myanmar is a further setback regarding accountability for systematic violations and abuses of human rights," it added.

"It is terrible that the authorities continue to ignore the ongoing killing of innocent Rohingya civilians, the rape of their women and girls, looting, torching and destruction of their houses and villages by soldiers and Rakhine extremists, causing fresh outflows of refugees from Arakan into Bangladesh," it further said.

The group also urged the Myanmar government to "fully implement all recommendations of the reports, as promised by [Myanmar's leader] Daw Aung San Suu Kyi, without delay; to constitute an independent commission to investigate the recent/ongoing atrocities against civilians in Arakan; and allow the UN fact-finding mission to investigate atrocity crimes perpetrated against the Rohingya population".

The atrocities in Arakan came hours after a commission led by ex-UN chief Kofi Annan urged the government to end restrictions on Rohingya Muslims in Rakhine.

After a year-long inquiry, the commission called for "urgent and sustained action on a number of fronts to prevent violence, maintain peace, foster reconciliation and offer a sense of hope to the state's hard-pressed population".

A security clampdown launched in October last year in Maungdaw, where Rohingya form the majority, led to a UN report on human rights violations by security forces that indicated crimes against humanity.

The UN documented mass gang-rape, killings -- including those of babies and children -- brutal beatings and disappearances. Rohingya representatives have said approximately 400 people were slain during the latest operations.

Share on Facebook Share on Twitter
Previous in Asia Pacific Between 2,000 and 3,000 Muslims were killed in Myanmar's Rakhine state... Next in Asia Pacific North Korea fired an unidentified projectile from its capital Pyongyang...
DAILY SABAH RECOMMENDS