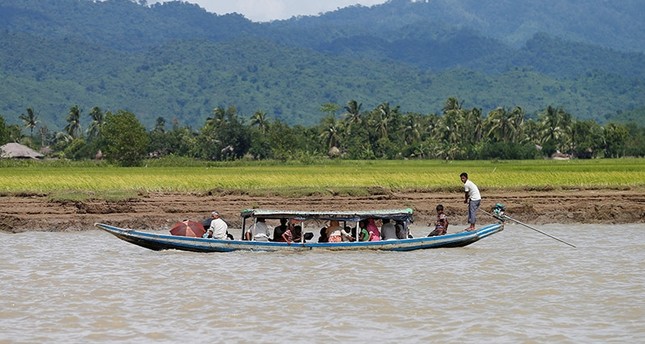 Bangladeshi border guards on Thursday recovered the bodies of 26 Rohingya women and children whose boat capsized as they fled violence in Myanmar, an official said, amid rising pressure on Bangladesh to shelter thousands marooned at its borders.

Around 18,500 Rohingya Muslims, many sick and some with bullet wounds, have managed to slip into Bangladesh since Friday, according to the International Organization for Migration (IOM).

They fled after a series of coordinated attacks by Rohingya insurgents on security forces in the north of Myanmar's Rakhine state led to a military crackdown.

Myanmar has evacuated thousands of Rakhine Buddhists from the area, where clashes have so far killed at least 117 people, most of them Rohingya insurgents but also security officials, according to the Myanmar government.

The treatment of about 1.1 million Rohingya in Buddhist-majority Myanmar is the biggest challenge facing national leader Aung San Suu Kyi, who has been accused by Western critics of not speaking out for a minority that has long complained of persecution.

Bangladesh border guard commander Lt. Col. S.M. Ariful Islam said at least three boats carrying an unknown number of Rohingya Muslims capsized in the Naf River at Teknaf in Cox's Bazar on Wednesday. He said the bodies of 15 children and 11 women were recovered, and it was unclear whether anyone was still missing.

The bodies of two Rohingya women and two children were recovered on Wednesday after their boat was fired on by Myanmar's Border Guard Police, Islam said.

The top official in the Bangladeshi border district of Cox's Bazar, Mohammad Ali Hossain, said the bodies would be buried because no one had claimed them.

In the town, makeshift camps for the displaced set up since similar violence last October were being expanded to accommodate thousands arriving in the past week.

One of those arrivals, Mohammed Rashid, 45, wore a surgical dressing under his eye, which he said was the result of bullet splinters hitting him after the Myanmar army opened fire on a group of Rohingya.

He said about 100 people made their way to the border together, and that he saw explosions and people dying.

"We hid in the forest for two days and then we were stopped at the border, but we got through. We heard that the houses in our village have burned down," Rashid told Reuters at the camp.

The recent violence marks a dramatic escalation of a conflict that has simmered since October, when a similar but much smaller series of Rohingya attacks on security posts prompted a brutal military response dogged by allegations of rights abuses.

The Rohingya are denied citizenship in Myanmar and regarded as illegal immigrants, despite claiming roots that date back centuries.

Bangladesh on Wednesday pushed back 366 Rohingya trying to enter the country mainly by small wooden boats, though thousands of others have set up temporary camps along the porous land border between the countries, borders guards said.

Hundreds of people have been stranded in a no man's land at the countries' border, the IOM said. Satellite imagery analyzed by U.S.-based Human Rights Watch indicated that many homes in northern Rakhine state were set ablaze.

Share on Facebook Share on Twitter
Previous in Asia Pacific At least 21 people have died and several more were feared trapped... Next in Asia Pacific Increasingly desperate to escape the violence in Myanmar, Rohingyas...
DAILY SABAH RECOMMENDS