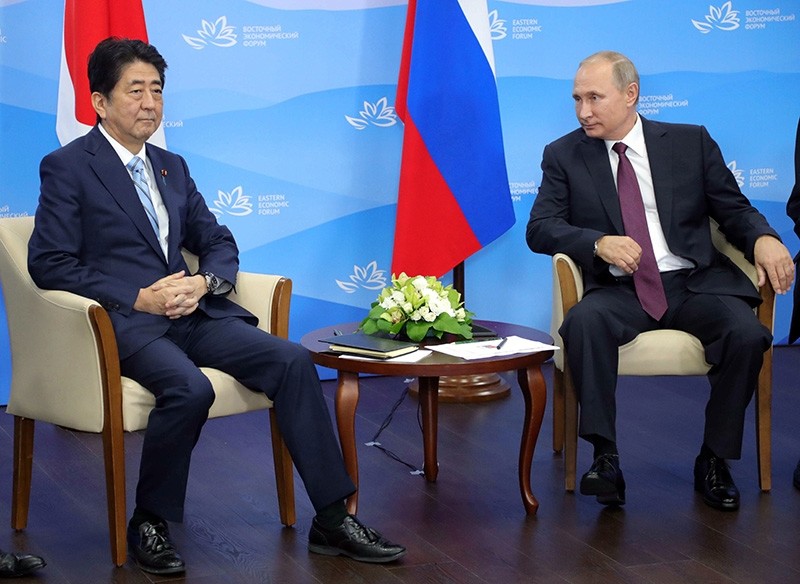 Russian President Vladimir Putin (C) and Japanese Prime Minister Shinzo Abe (L) during their bilateral meeting on the sidelines of the Eastern Economic Forum at the Far Eastern Federal University (EPA Photo)
by Compiled from Wire Services Sep 07, 2017 12:00 am

In a joint news conference, both leaders highlighted the importance of common sense in resolving the issue, which threatens global peace and decisively condemned North Korea's launch of a ballistic missile that flew over Japan.

Putin reiterated that the crisis around North Korea should be resolved only by political means, and that it posed a threat to peace and stability in the region.

Putin said he believed North Korea's leadership feared any freeze of its nuclear program would be followed by what amounted to "an invitation to the cemetery."

Putin, speaking at an economic forum in the far eastern Russian port of Vladivostok alongside his South Korean counterpart and the Japanese prime minister, had previously warned that simmering tensions around Pyongyang's missile program could tip into "global catastrophe."

But on Thursday, after days of talks with regional leaders and officials, Putin struck a more optimistic note, saying Russia could see that the administration of U.S. President Donald Trump wanted to defuse tensions around North Korea.

"I am sure that things will not go as far as a large-scale conflict, especially with the use of weapons of mass destruction," Putin told delegates at the forum.

"All the competing sides have enough common sense and understanding of their responsibility. We can solve this problem through diplomatic means."

Russia has a land border with North Korea less than 20 km (12 miles) long.

Putin, who was sharing a platform with South Korean counterpart Moon Jae-in and Japanese Prime Minister Shinzo Abe, has spent the past few days pushing for negotiations, calling on all sides to dial down rhetoric.

The United States wants the U.N. Security Council to impose an oil embargo on North Korea, ban its , and subject leader Kim Jong Un to an asset freeze and travel ban, according to a draft resolution seen by Reuters on Wednesday.

Putin gave no indication on Thursday whether Moscow would back that resolution; but he and top Russian government officials have previously condemned the idea of tightening sanctions and shown little enthusiasm to stop modest fuel exports to Pyongyang or send home North Korean workers.

Instead, Russia, along with China, has advocated a "freeze for freeze" plan, under which the United States and South Korea would stop major military exercises in exchange for North Korea halting its weapons programs.

Neither side appears willing to budge so far however.

Putin said Pyongyang would not end its nuclear and missile program because it viewed them as its only means of self-defense.

"It's impossible to scare them," said Putin.

Pyongyang was being offered the prospect of no new sanctions if it froze its weapons programs, but Putin said North Korea believed the wider risks to its own security outweighed the potential economic benefits of such a concession.

"We are telling them that we will not impose sanctions, which means you will live better, you will have more good and tasty food on the table, you will dress better," said Putin. "But the next step, they think, is an invitation to the cemetery. And they will never agree with this."