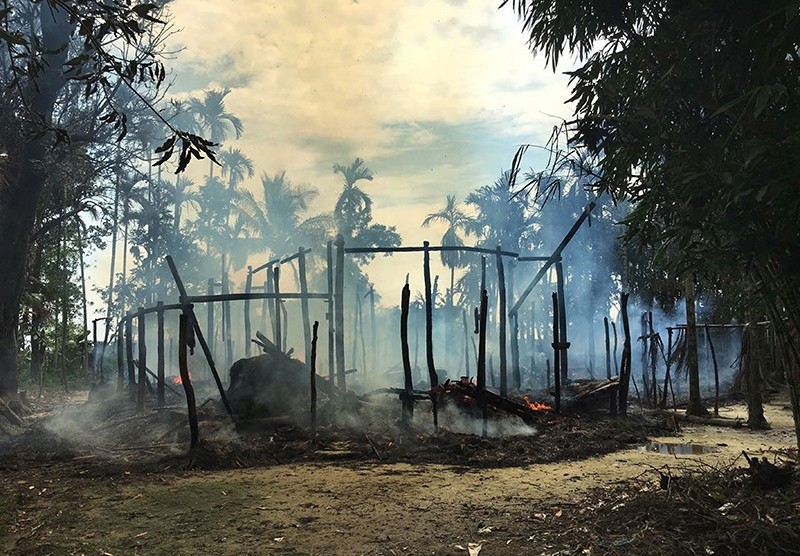 "The current situation cannot yet be fully assessed, but the situation seems a textbook example of ethnic cleansing," he told the U.N. Human Rights Council in Geneva.

The U.N. rights chief said he was appalled that Myanmar has reportedly started laying mines on its border with Bangladesh, and that refugees are only allowed to come back home if they provide proof of their nationality, even though most Rohingya are stateless.

"This measure resembles a cynical ploy to forcibly transfer large numbers of people without possibility of return," Zeid said.

Even before the current crackdown, authorities had committed widespread violations against the Rohingya, which could amount to crimes against humanity if the matter were tried in a court, he added.

"I call on the government to end its current cruel military operation, with accountability for all violations that have occurred and to reverse the pattern of severe and widespread discrimination against the Rohingya population," Zeid said.

He said he was particularly "appalled" by reports that Myanmar authorities had begun laying landmines along the border with Bangladesh to prevent those who fled from returning.

"This complete denial of reality is doing great damage to the international standing of a government which, until recently, benefited from immense good will," he said, calling on authorities to allow his office access to investigate the situation in the country.

Violence broke out in the Rakhine state after security forces launched an operation against Rohingya Muslims, forcing nearly 313,000, including women and children to flee and seek refuge in neighboring Bangladesh since Aug. 25, when clashes began.

The U.N. documented mass gang-rape, killings, including infants and young children, brutal beatings and disappearances. Rohingya representatives have said approximately 400 people have been slain in the crackdown.