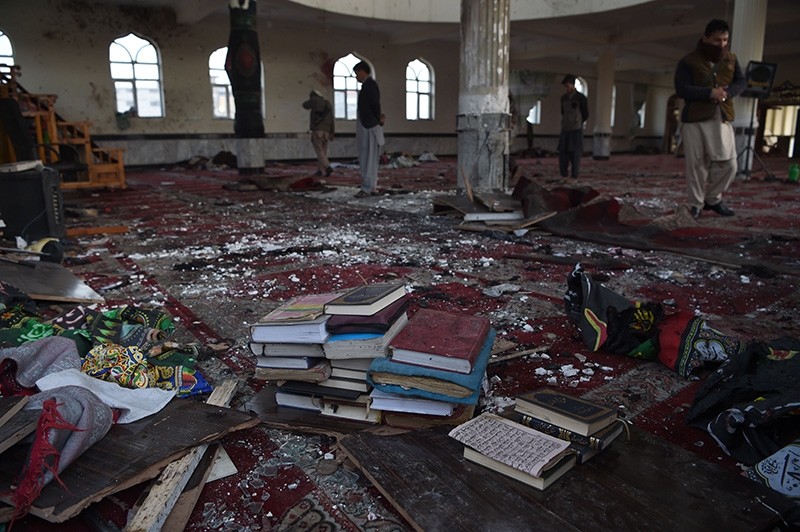 Afghan residents look inside the Imam Zaman Shiite mosque which was a the site of a suicide attack during evening prayers, in Kabul on October 21, 2017. (AFP Photo)
by Associated Press Oct 21, 2017 12:00 am

The Daesh terror group claimed responsibility for a suicide bombing at a Shiite mosque in the capital as Afghan officials on Saturday raised the number of casualties from the attack to at least 39 dead and at least 41 wounded.

In a statement on its website late Friday, Daesh claimed its fighter Abu Ammar al-Turkmani "detonated his explosive vest among the apostates" during Friday prayers in the Imam Zaman mosque in western Kabul.

The attack was one of two on mosques in the troubled, war-torn country. A suicide bombing in western Ghor province struck a Sunni mosque, also during Friday prayers, killing 33 people, including a warlord who was apparently the target, said Mohammad Iqbal Nizami, spokesman for the provincial chief of police.

The attacks were the latest in a devastating week that saw Taliban attacks kill scores across the country.

Several mosques have been attacked following this warning, killing scores of Shiite worshippers in Kabul and in western Herat province. Residents say attendance at local Shiite mosques in Kabul on Friday has dropped by at least one-third.

The Interior Ministry released a statement Saturday saying it was investigating the attack in Kabul's Dashte-e-Barchi neighborhood. It said the assailant blew himself up as worshippers began their prayers.

Eyewitness Ali Mohammad said the mosque was packed with worshippers, both men and women praying at the height of the Muslim week. The explosion was so strong that it shattered windows on nearby buildings, he said.

Dashte-e-Barchi is a sprawling neighborhood in the west of Kabul where the majority of people are ethnic Hazaras, who are mostly Shiite Muslims.

As attacks targeting Shiites have increased in Kabul, residents of this area have grown increasingly afraid. Most schools have additional armed guards from among the local population.

Abdul Hussain Naseri, a Shiite cleric, condemned the attack and said more security is needed for Shiite mosques in the city.

The attack on the Sunni mosque in Ghor province took place in the Do Laina district, according to Mohammad Iqbal Nizami, the spokesman for the provincial chief of police. He said the target apparently was a local commander, Abdul Ahed, a former warlord who has sided with the government. Seven of his bodyguards were also killed in the bombing. No group immediately claimed responsibility for the attack.

It has been a brutal week in Afghanistan, with more than 70 killed, mostly policemen and Afghan soldiers but also civilians as militant attacks have surged. The Taliban have taken responsibility for the earlier assaults this week that struck security installations in the east and west of the country.

Funerals were scheduled for Saturday at several cemeteries in western Kabul.