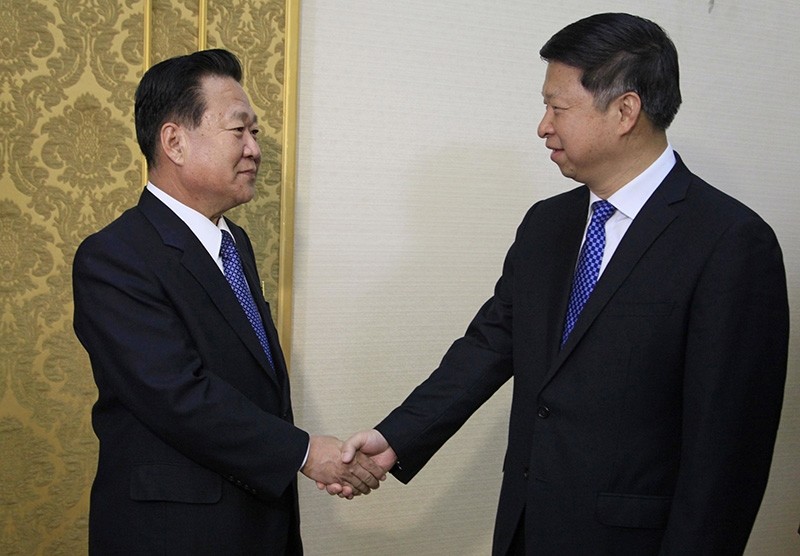 Song Tao is visiting on behalf of President Xi Jinping, ostensibly to brief the North's officials on the recent Chinese Communist Party congress and other "issues of mutual interest".

The two communist neighbors, once said by Mao Zedong to be "as close as lips and teeth", are at odds over the nuclear standoff and US President Donald Trump is urging Beijing to pile pressure on Pyongyang.

Song, the first senior Chinese envoy to visit in more than a year, had been widely expected to raise the impasse over North Korea's missile and nuclear tests in his Friday meeting with Choe Ryong-Hae, a top official in North Korea's ruling party.

But a Chinese Communist Party report of the meeting made no mention of those issues, focusing instead on platitudes about the long relationship.

A party statement said Song and Choe agreed that mutual ties were "the common treasure of the two peoples".

"Both parties should make concerted efforts to promote the development of the relations between the two parties and the two countries and let them benefit the two peoples," the statement paraphrased them as saying.

A brief report by North Korea's state-run KCNA news agency said Song told his hosts that China wanted to "develop the traditional friendly relations between the two parties and countries", but gave no further details.

Trump, who warned Xi during his trip to Beijing last week that time was "quickly running out" to solve the nuclear crisis, took to Twitter on Thursday to hail Song's mission as "a big move, we'll see what happens!"

But experts doubt Song's visit will yield breakthroughs, saying Beijing has far less political influence on Kim than is thought despite the economic ties.

"Relations are extremely stressed. Perhaps the lowest point since the Korean War. Perhaps (the mission) will put a floor under China-North Korea relations, preventing further deterioration," said Bonnie Glaser, China expert at the Center for Strategic and International Studies in Washington.

China has imposed its own banking restrictions on North Koreans in addition to enacting a series of UN measures that include bans on imports of coal, iron ore and seafood from the North.

But Beijing fears that squeezing Pyongyang too hard would cause its collapse. Analysts say Song's trip is probably aimed more at urging Kim's regime not to escalate tensions rather than applying real pressure for disarmament.