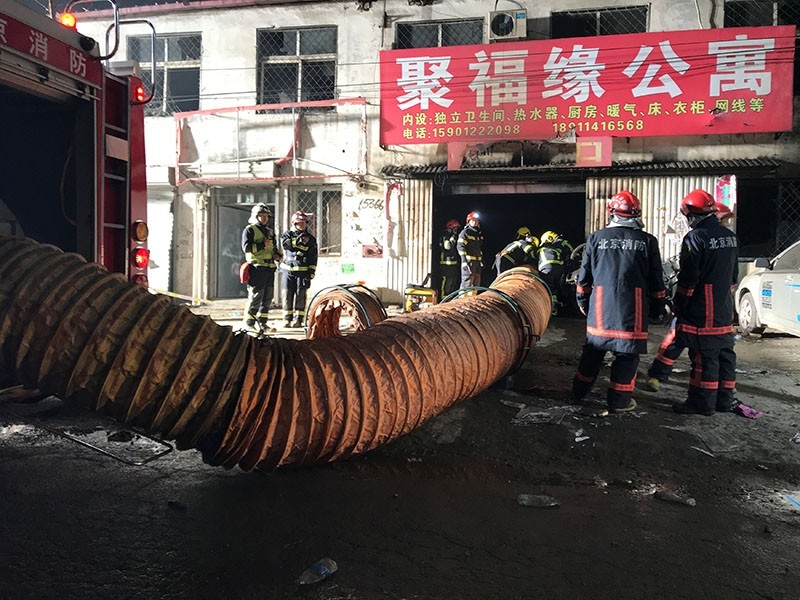 Firefighters put out the fire at Xinjian Village in the district of Daxing by 9 p.m. Saturday, three hours after it was reported, Xinhua News Agency said.

It said the injured have been taken to a hospital for treatment.

Such units are commonly rented cheaply to migrant workers who take on low-paying, labor-intensive jobs in the city.

The village where the fire broke out also houses a number of small clothing factories.

Migrants who travel to big cities looking for work often have few housing options to choose from because a household registration system excludes them from government-subsidized homes. Some reforms are underway but critics say the pace of change is slow.

Reached by phone, the local fire department and district government refused to comment.

Authorities were closely controlling information related to the fire. Internet censors blocked searches about the fire on popular microblog sites. Independent reports by some Chinese news outlets were taken down and replaced by Xinhua's report, which included few details.

On Sunday morning, city authorities said they were still investigating the cause of the fire, though state news agency Xinhua said an unspecified number of suspects were being held in police custody.

"We have set up a team to investigate the accident, everything is under investigation now," said Sun, a spokesman for the local Daxing district government, who declined to give his full name.

"We are investigating the specific causes of this fire and those responsible will be subject to legal liability," Sun said.

The local fire department received a call about the fire at 6:15 pm (1015 GMT) Saturday and dispatched 14 fire teams and 34 fire trucks. A post on its social media account just after midnight said the fire had been extinguished.

People who were trapped inside the building and rescued have been sent to a hospital, the fire department said in the post on its official Weibo account, a twitter-like service.

Beijing mayor Cai Qi directed rescue operations at the scene, according to Xinhua, which quoted the mayor as saying the city would also set up a team to investigate the cause and responsibility for the fire.

The fire comes at a tense time for the capital, as authorities have launched a beautification campaign in Beijing's dense center, closing unsightly stalls and businesses and repaving streets.

Some have ended up in burgeoning towns on the outskirts of the city like Xinjian Village, which literally means "newly built village", where the fire broke out Saturday.

Beijing will close down industrial complexes and clean up all illegal businesses, Xinhua quoted Cai as saying.

The boarding house's phone lines were dead Sunday morning and nearby guest houses said they did not know anything about the fire.

Discussion of the fire on Weibo was being censored as well, with search results for fire in the district returning a message saying the service could not display results because of relevant regulations.

Deadly fires are common in China, where fire safety regulations are widely flouted and enforcement is often lax.

Eleven people died in September when a fire broke out in two houses in the eastern city of Taizhou.