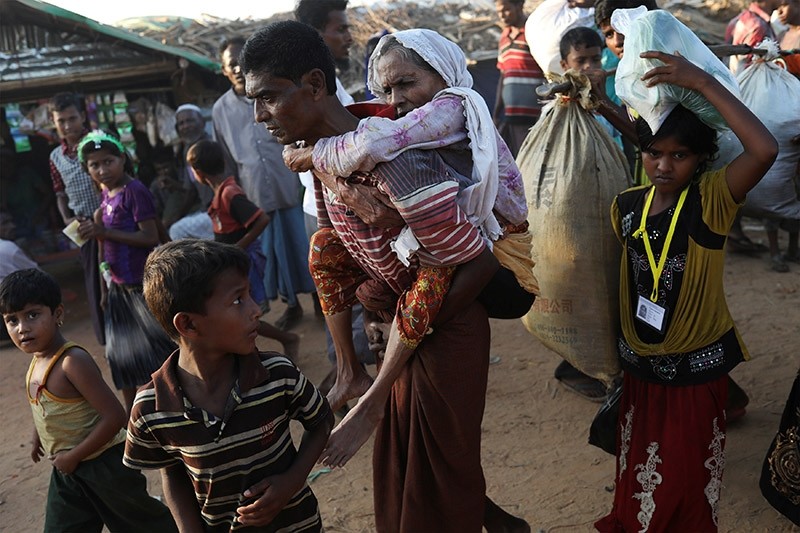 Myanmar's suffocating controls over its Rohingya population amount to "apartheid," Amnesty International said Tuesday in a probe into the root causes of a crisis that has sent 620,000 refugees fleeing to Bangladesh.

Scenes of dispossessed Rohingya in Bangladeshi camps have provoked outrage around the world, as people who have escaped Rakhine state since August recount tales of murder, rape and arson at the hands of Myanmar troops.

Myanmar and Bangladesh have agreed in principle to repatriate some Rohingya but disagree over the details, with Myanmar's army chief saying last week it was impossible to accept the number of refugees proposed by Dhaka.

The Amnesty report details how years of persecution have led to the current crisis.

A yearslong "state-sponsored" campaign has restricted virtually all aspects of Rohingyas' lives, the Amnesty study says, confining the Muslim minority to a "ghetto-like" existence in the mainly Buddhist country.

The 100-page report, based on two years of research, says the web of controls meet the legal standard of the "crime against humanity of apartheid."

"Rakhine State is a crime scene. This was the case long before the vicious campaign of military violence of the last three months," said Anna Neistat, Amnesty's senior director for research.

Myanmar's authorities "are keeping Rohingya women, men and children segregated and cowed in a dehumanizing system of apartheid," she added.

The basis for the widespread hatred toward the Muslim group comes from a contentious 1982 Citizenship law.

Enacted by the then-junta, it effectively made hundreds of thousands of Rohingya stateless.

Since then, Amnesty says, a "deliberate campaign" has been waged to deny the Rohingyas' right to live in Myanmar, where they are denigrated as "Bengalis" or illegal migrants from Bangladesh.

A system of identification cards is central to those bureaucratic controls, with Rohingya routinely issued one form of ID, only to see it later rendered meaningless.

She raised concerns that paperwork may be used to restrict the number of Rohingya returnees. Myanmar authorities have said they must be subject to a "verification" process.

"A lot of the burden of proof is going to be put on refugees, to prove that they are from Myanmar," said Haigh. "The government has records of these people; it's just choosing not to acknowledge them."

The latest wave of persecution has pushed more than half of the 1.1-million strong minority out of the country, with those left behind sequestered in increasingly isolated and vulnerable villages.

Although the Rohingya have been victims of discrimination for decades, the report details how repression intensified after an outbreak of violence between Buddhist and Muslim communities in 2012.

Long before the recent exodus of Rohingya from northern Rakhine state -- now a virtual ghost land of torched villages and unharvested paddy fields -- they were unable to travel freely, requiring special permits and facing arrest, abuse and harassment at numerous checkpoints, Amnesty said.

In central Rakhine state, Rohingya Muslims were driven out of urban areas after the 2012 violence.

They remain completely segregated from the Buddhist community, confined by barbed wire and police checkpoints to camps which Amnesty likens to an "open-air prison."

The community has been widely denied access to medical care, their children cannot attend government schools and many mosques have been sealed off, the rights watchdog documented.

"Rohingya who have fled persecution in Myanmar cannot be asked to return to a system of apartheid."