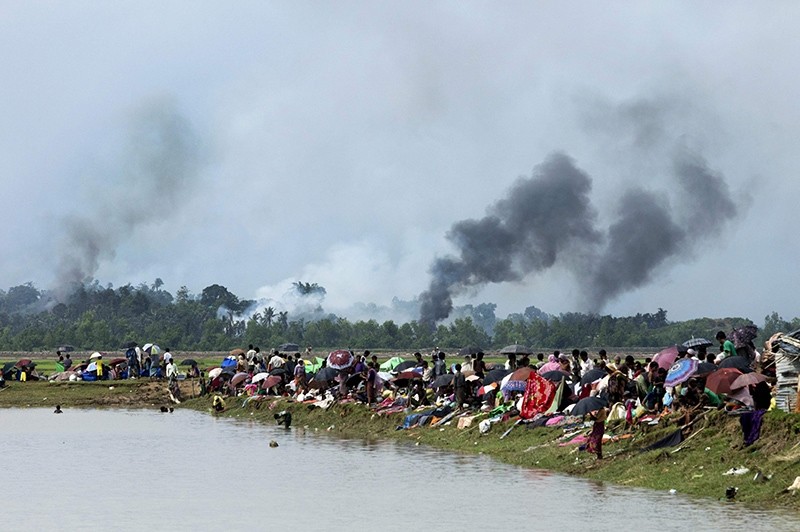 Smoke billows above a burning Rohingya village in Myanmar's Rakhine state as members of the Muslim minority take shelter in a no-man's land between Bangladesh and Myanmar in Ukhiya, Sept. 4, 2017. (AFP Photo)
by Compiled from Wire Services Nov 22, 2017 12:00 am

The United States is declaring that the violence against Rohingya Muslims in Myanmar constitutes "ethnic cleansing."

Secretary of State Rex Tillerson says that "no provocation can justify the horrendous atrocities that have ensued." He's blaming Myanmar's forces and "local vigilantes."

Tillerson says those responsible "must be held accountable."

U.S. lawmakers and rights groups have been urging the Trump administration to call it ethnic cleansing. Tillerson acted on a recent recommendation from the State Department.

The declaration is likely to increase pressure on the Trump administration and Congress to move toward new sanctions on Myanmar. Sanctions on the Southeast Asian nation were eased in recent years as the country made steps toward transitioning to democracy.

Myanmar has been widely criticized for a military crackdown that has driven almost 700,000 Rohingya Muslims to flee northern Rakhine state into neighboring Bangladesh. The United Nations has said the crackdown appears to be a campaign of "ethnic cleansing."

Various rights groups said there was mounting evidence that Myanmar army was conducting in a genocide against the Muslim minority. The atrocities attributed to the Myanmar army's operation against Rohingya include mass killings, burning people alive and rape.