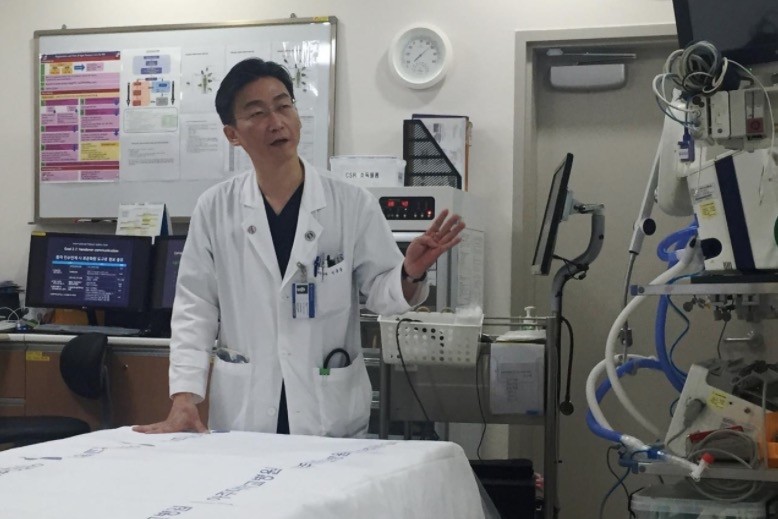 Lee Cook-jong, a South Korean surgeon who operated the defected North Korean soldier with gunshots, speaks during an interview with Reuters at a hospital in Suwon, South Korea, November 23, 2017. (Reuters Photo)
by reuters
Nov 24, 2017 12:00 am
North Korea's latest defector, a young soldier known only by his family name Oh, is a quiet, pleasant man who has nightmares about being returned to the North, his surgeon said on Thursday.
"He's a pretty nice guy," said lead surgeon John Cook-Jong Lee, who has been operating and caring for the 24-year-old. Oh has become a focus of worldwide attention after he was badly wounded by fellow North Korean soldiers as he scrambled across the border in the Demilitarized Zone that separates North and South on Nov. 13.

Video of Oh's escape released on Wednesday showed him stumbling over the border and being dragged unconscious through the undergrowth by South Korean troops.

Surgeon Lee has been almost the only person to speak with Oh since he arrived at the hospital, he told Reuters in an interview at his office at Ajou University Hospital, just a few floors away from where the defector lies guarded by South Korean special forces and intelligence officers.

The surgeon, who has hung a South Korean flag in the soldier's room, said he is avoiding subjects that may disturb his patient. Oh is eating his first "clear liquid" food such as broths, and can smile, talk, and use his hands, Lee said. But when his patient woke on Sunday he cried out in pain, and Lee said he is still anxious about the South Korean guards.

Lee said Oh told him that he had joined the North Korean army when he was 17, right after secondary school graduation. The soldier's hair is styled "like a jarhead, like a U.S. Marine, so I actually joked 'why don't you join the South Korean Marines?' He smiled and said that he would never ever go back to the military system again."

Medical teams have worked for days to remove the shards of at least four bullets from Oh's body, stitch up his shredded organs, and treat pre-existing conditions including tuberculosis, hepatitis B, and a case of massive intestinal worms, Lee said.

Since Oh's defection, North Korea appeared to have replaced all its security guards on the border, an intelligence source in the South told Yonhap news agency on Thursday.

Lee said that when the defector arrived in an American military helicopter at the hospital – which is equipped with state-of-the-art diagnostic equipment and is used to treat VIP visitors such as visiting U.S. presidents - he came with zero personal information.

On the flight in, American army flight medics had fought to keep Oh alive, jabbing a large needle into his chest to treat a collapsed lung.

Oh was immediately wheeled into a diagnostic room where doctors confirmed he was suffering from massive internal bleeding. "We knew then that we didn't have time to hesitate," Lee said, standing in that room Thursday night.

Two major surgeries were required to remove the bullets and patch Oh back together, and the medical team pumped as much as 12 liters of new blood into his body. The normal body has less than half as much blood.

"He told me that he is so thankful for South Koreans for saving his life and giving him that much blood," Lee said.

Lee has been playing South Korean pop music and American films and TV shows for his patient, but has not exposed him to any news coverage.

Most North Korean defectors undergo security questioning by South Korea's intelligence agency once they arrive in the South before being sent to a resettlement center for a three-month education on life in the South. After they are released, central and local governments provide 7 million won ($6,450) in cash over a year, as well as support in housing, education and job training.

Police officers are assigned to each of the defectors to ensure their security and safety.

Even if Oh fully recovers, some scars will stay for the rest of his life, the surgeon said.

Among the longest lasting wounds will be the damage to his colon, which was shredded by a bullet and had to be stitched back together in seven places. "It's a lifelong complication for the patient, so he's better to be very cautious in his diet," said the surgeon.

Besides the potential for further medical complications, Lee says he is most worried about making sure Oh recovers psychologically. The soldier has already told him he had a nightmare about being returned to the North.

The surgeon said he has asked senior South Korean military officials who are eager to question the soldier to hold off while he recovers.

"This North Korean guy is not going anywhere," Lee said. "He is staying in South Korea. So we don't need to be hasty."