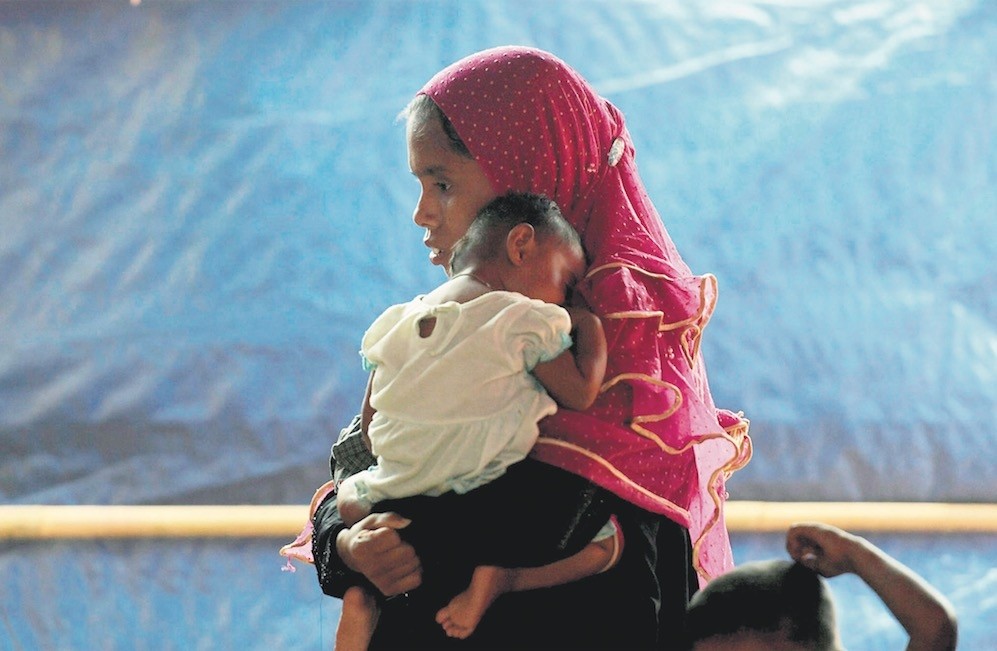 Rohingya refugees visit a health clinic at the Balukhali refugee camp near Cox's Bazar, Bangladesh, Dec. 11.
by Compiled from Wire Services Dec 13, 2017 12:00 am

A suspected diphtheria outbreak has killed nine refugees and infected more than 700, mostly children, as poor sanitation and lack of hygiene in Bangladesh's Rohingya refugee camps spark growing fears over the emergence of other highly contagious viruses

Amid lack of hygiene and poor sanitation in Rohingya refugee camps in Bangladesh, a suspected diphtheria outbreak killed nine refugees and infected more than 700. Bangladesh's health services department said of the 700 refugees infected, 104, most of them children, had contracted the disease in the last 24 hours.

"So far nine people have died in a suspected outbreak of diphtheria," said Meerzady Sabrina Flora, the head of Bangladesh's Institute of Epidemiology, Disease Control and Research (IEDCR), as reported by Agence France-Presse (AFP).

Health workers in Bangladesh said they had been caught unaware by the outbreak of the bacterial disease in the Rohingya refugee camps of southeast Bangladesh. One of the biggest concerns in camps is poor sanitation and lack of hygiene facilities that has sparked growing fears of the emergence of cholera, which spreads through dirty water and can kill if untreated.

The International Federation of Red Cross and Red Crescent Societies (IFRC), which opened a field hospital near the camps in October, has treated numerous patients for acute diarrhea. So far, 67 cases of the highly contagious virus have been registered, but Bangladeshi authorities insist the situation is under control, with a mass-vaccination campaign underway.

Authorities have set up two isolation units in the overcrowded refugee camps where many lack adequate shelter and food and there is little access to medical services.

Diphtheria is a highly contagious respiratory disease that can be fatal if left untreated, but has become increasingly rare in recent decades due to high rates of vaccination.

Bangladeshi authorities said they had prepared for outbreaks of other diseases in the camps, but not diphtheria, which had been all but eradicated in Bangladesh.

The government and U.N. agencies are now vaccinating around 250,000 children under the age of seven living in camps and temporary settlements near the border with Myanmar.

"We are moving quickly to control this diphtheria outbreak before it spins out of control," said Dr. Navaratnasamy Paranietharan, the World Health Organization representative to Bangladesh. "The vaccines will help protect every Rohingya child in these temporary settlements from falling prey to the deadly disease."

In one of the worst refugee crises in decades, Rohingya refugees continue to flee Myanmar to Bangladesh even though both countries set up a timetable last month to allow them to start to return home, the U.N. High Commissioner for Refugees (UNHCR) said last week. Some 20,000 Rohingya fled Myanmar to Bangladesh in November, and at least 270 so far in December, bringing the total since violence erupted on Aug. 25 to 646,000, according to the UNHCR and Leonard Doyle of the International Organization of Migration (IOM), as reported by Reuters.

Buddhist-majority Myanmar has denied citizenship to the Rohingya minority since 1982 and excludes them from the 135 officially recognized ethnic groups, which effectively renders them stateless. They have long faced discrimination and persecution with many Buddhists in Myanmar calling them Bengalis and saying they migrated illegally from Bangladesh, even though they have lived in the country for generations.