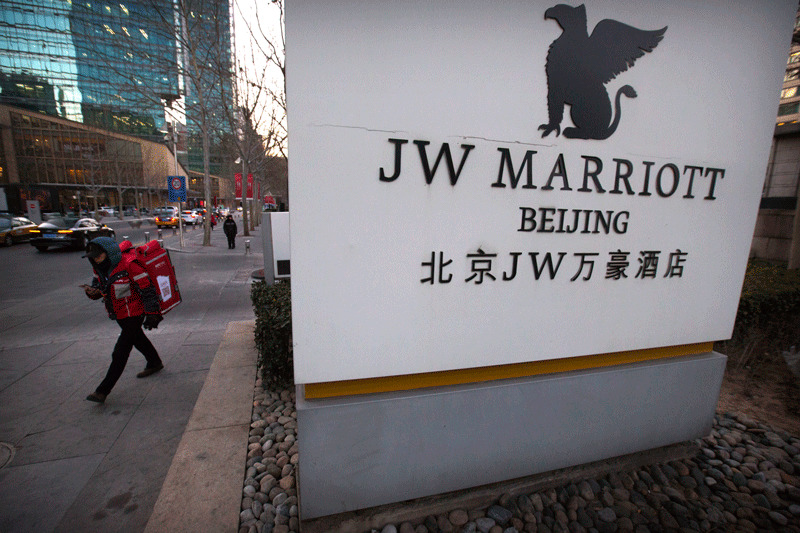 A deliveryman walks away from the entrance of a JW Marriott hotel in Beijing (AP Photo)
by Compiled from Wire Services Jan 12, 2018 12:00 am

Authorities in China have shut down Marriott's local website for a week after the U.S. hotel giant mistakenly listed Chinese-claimed regions such as Tibet and Hong Kong as separate countries.

Shanghai's cyberspace authority late Thursday ordered Marriott to close its Chinese website and app for a week and completely clear out illegal and irregular information, according to a government statement.

Marriott's Chinese website now shows a message with an apology.

"We never support any separatist organization that damages China's sovereignty and territorial integrity," it says.

"We apologize profoundly for any behavior that will cause misunderstanding about the above stance."

In a customer questionnaire in Mandarin, Marriott asked members of the chain's customer rewards program to list their country of residence, giving Tibet, Hong Kong, Macau, and Taiwan as possible options.

It triggered an uproar on Chinese social media as Tibet is an "autonomous region" firmly under Chinese control since the 1950s.

Hong Kong and Macau are former British and Portuguese colonies, respectively, that are now "special administrative regions" under China.

Taiwan has been self-ruled since splitting from the mainland after a 1949 civil war, but Beijing continues to claim sovereignty over the island.

"We welcome foreign companies to invest and operate in China, but in the meantime they should respect the sovereignty and territorial integrity of China, respect our laws and regulations, as well as the feelings of the Chinese people," foreign ministry spokesman Lu Kang said at a regular press briefing.

"I think this is the basic principle for foreign countries to conduct operations and investment in other countries," Lu said.

While Marriott apologised, public anger further escalated after the official Twitter account of Marriott Rewards liked a tweet from "Friends of Tibet", an India-based group that supports Tibetan independence and congratulated the hotel chain for listing Tibet as a country.

Marriott president and chief executive Arne Sorenson soon issued a lengthy apology letter, which described the "like" as "careless".

"Marriott International respects and supports the sovereignty and territorial integrity of China. Unfortunately, twice this week, we had incidents that suggested the opposite," said Sorenson.

"Upon completion of a full investigation into how both incidents happened, we will be taking the necessary disciplinary action with respect to the individuals involved, which could include termination."

Earlier on Friday China's aviation authority said it had asked Delta Air Lines to investigate why Taiwan and Tibet were listed as countries on its website, and demanded an "immediate and public" apology.

Civil Aviation Administration of China said on its website it would require all foreign airlines operating routes to China to conduct comprehensive investigation of their websites, apps and customer-related information and "strictly comply with China's laws and regulations to prevent a similar thing from happening".

Delta was not immediately able to comment outside U.S. office hours.

Visitors to Delta's complaint and comment section on its Chinese website could select Tibet and Taiwan as countries which they were from, as of Friday morning in China. The Tibet option had been removed as of 4:00 p.m. (0800 GMT) China time.