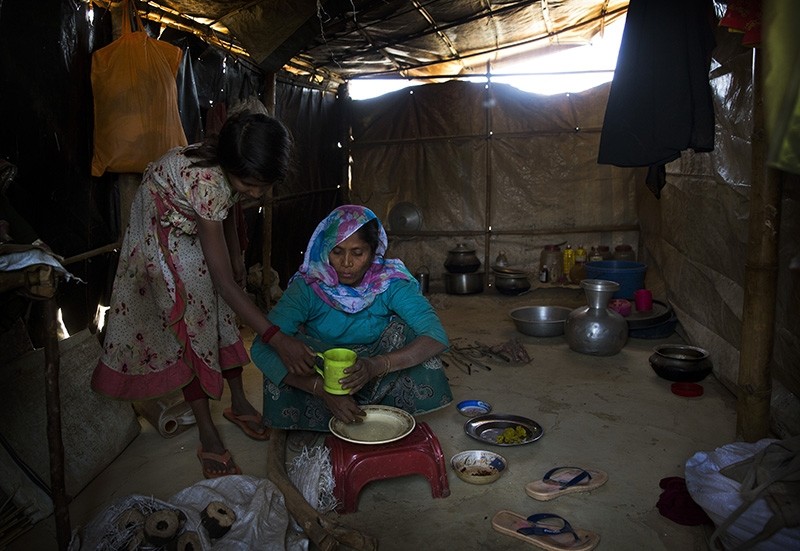 In this Jan. 28, 2018 photo, Rohingya Muslim refugees Nooranksih, 9, left, and her mother Rohima Khatu, 45, originally from the Myanmar village of Gu Dar Pyin, eat inside their makeshift shelter at Balukhali refugee camp, Bangladesh. (AP Photo)
by Associated Press Feb 02, 2018 12:00 am

The faces of the men half-buried in the mass graves had been burned away by acid or blasted by bullets. Noor Kadir finally recognized his friends only by the colors of their shorts.

Kadir and 14 others, all Rohingya Muslims in the Myanmar village of Gu Dar Pyin, had been choosing players for the soccer-like game of chinlone when the gunfire began. They scattered from what sounded like hard rain on a tin roof. By the time the Myanmar military stopped shooting, only Kadir and two teammates were left alive.

Days later, Kadir found six of his friends among the bodies in two graves.

They are among at least five mass graves, all previously unreported, that have been confirmed by The Associated Press through multiple interviews with more than two dozen survivors in Bangladesh refugee camps and through time-stamped cellphone videos. The Myanmar government regularly claims such massacres of the Rohingya never happened, and has acknowledged only one mass grave containing 10 "terrorists" in the village of Inn Din. However, the AP's reporting shows a systematic slaughter of Rohingya Muslim civilians by the military, with help from Buddhist neighbors — and suggests many more graves hold many more people.

"It was a mixed-up jumble of corpses piled on top of each other," said Kadir, a 24-year-old firewood collector. "I felt such sorrow for them."

The graves are the newest piece of evidence for what looks increasingly like a genocide in Myanmar's western Rakhine state against the Rohingya, a long-persecuted ethnic Muslim minority in the predominantly Buddhist country. U.N. spokesman Stephane Dujarric called the AP report "extremely troubling," and urged Myanmar to allow access to the region for further investigation. Spokeswoman Heather Nauert also said the U.S. State Department was "deeply, deeply troubled by these reports of mass graves."

Myanmar has cut off access to Gu Dar Pyin, so it's unclear just how many people died, but satellite images obtained by the AP from DigitalGlobe, along with video of homes reduced to ash, reveal a village that has been wiped out. Community leaders in the refugee camps have compiled a list of 75 dead so far, and villagers estimate the toll could be as high as 400, based on testimony from relatives and the bodies they've seen in the graves and strewn about the area. A large number of the survivors carry scars from bullet wounds, including a 3-year-old boy and his grandmother.

Almost every villager interviewed by the AP saw three large mass graves at Gu Dar Pyin's northern entrance, near the main road, where witnesses say soldiers herded and killed most of the Rohingya. A handful of witnesses confirmed two other big graves near a hillside cemetery, not too far away from a school where more than 100 soldiers were stationed after the massacre. Villagers also saw other, smaller graves scattered around the village.

Survivors said that the soldiers carefully planned the Aug. 27 attack, and then deliberately tried to hide what they had done. They came to the slaughter armed not only with rifles, knives, rocket launchers and grenades, but also with shovels to dig pits and acid to burn away faces and hands so that the bodies could not be identified. Two days before the attack, villagers say, soldiers were seen buying 12 large containers of acid at a nearby village's market.

The killing began around noon, when more than 200 soldiers swept into Gu Dar Pyin from the direction of a Buddhist village to the south, firing their weapons.

For days, Rohingya from the area stole into Gu Dar Pyin and rescued people who'd been left for dead by the soldiers. Thousands of people from the area hid deep in the jungle, stranded without food except for the leaves and trees they tried to eat. More than 20 infants and toddlers died because of the lack of food and water, villagers said.

A day after the shooting began, another group of survivors watched from a distant mountain as Gu Dar Pyin burned, the flames and smoke snaking up into a darkening sky.

Rohima Khatu, 45, recounted her story as tears streamed down the face of her 9-year-old daughter, Hurjannat, who sat silently by her mother's side.

Khatu was determined to find her husband, even though women risked not only death but rape if they were caught by the soldiers. Villagers said her husband was shot after he stayed home to protect their 10 cows, five chickens and eight doves, along with their rice stockpiles.

So 15 days after the massacre, she searched for him in the graves at Gu Dar Pyin's northern entrance, trying to identify him by the green lungi and white button-down shirt he had been wearing. Only 10 minutes passed before someone shouted that about 20 soldiers were coming.

"There were dead bodies everywhere, bones and body parts, all decomposing, so I couldn't tell which one was my husband," Khatu said. "I was weeping while I was there. I was crying loudly, 'Where did you go? Where did you go?'"

"I have lost everything."