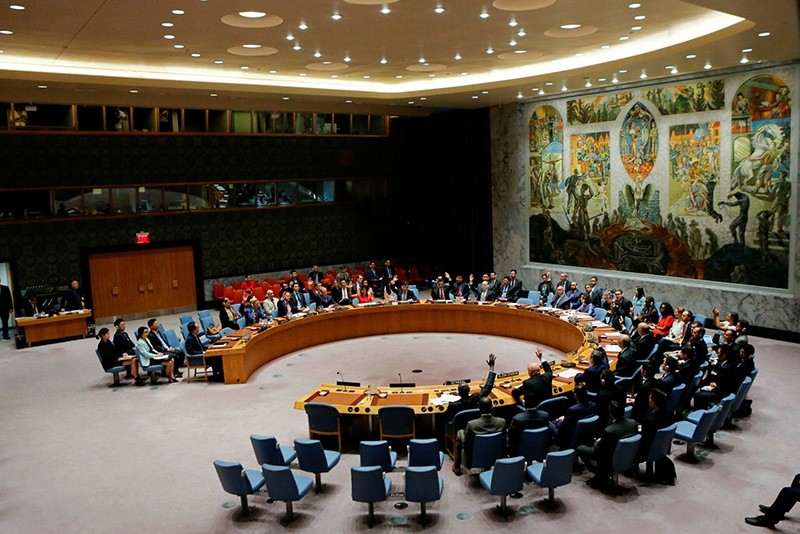 U.N. Security Council members vote on a U.S.-drafted resolution toughening sanctions on North Korea, at the United Nations headquarters in New York on Aug. 5, 2017. (AFP Photo)
by Compiled from Wire Services Feb 12, 2018 12:00 am

North Korea is again asking U.N. Secretary-General Antonio Guterres to organize an international forum of legal experts to clarify the legality of increasingly tough Security Council sanctions, which it says are erasing its people's "right of existence."

The mission said the U.N. Secretariat led by Guterres rejected the request it first made a year ago, saying it's up to the Security Council to determine what constitutes a threat to international peace and security.

But North Korea urged the Secretariat to listen to lawyers from many countries who insist the council has no legal or moral justification for condemning its nuclear tests or launches of intercontinental ballistic missiles and satellites.

Meanwhile, U.S. Secretary of State Rex Tillerson said Monday it was "too early" to discuss direct negotiations with North Korea, after Vice President Mike Pence said the U.S. was open to talks.

Pence was quoted in the Washington Post on Sunday as saying the U.S. and South Korea had agreed terms for future diplomatic engagement with North Korea.

Asked about the article during a visit to Egypt, Tillerson said: "I think it's too early to judge."

"We've said for some time it's really up to the North Koreans to decide when they're ready to engage with us in a sincere way, a meaningful way," he said.

"They know what has to be on the table for conversations." He said it was important first "to determine whether the parties are in fact ready to engage in something that's meaningful."

Pence's comments come at a time of reconciliation between the two Koreas, which are still technically at war.

But Pence, speaking to reporters on Saturday, stressed "the need to continue to isolate North Korea economically and diplomatically until they abandon their nuclear and ballistic missile program."