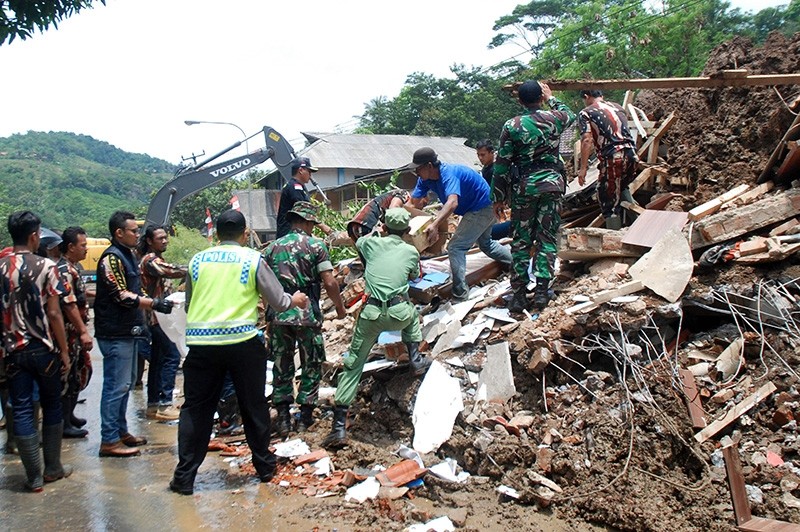 An Indonesian search and rescue team joined by volunteers remove debris from an area hit by a landslide in Sumedang on Sept. 21, 2016 (AFP File Photo)
by French Press Agency - AFP Feb 22, 2018 12:00 am

Eleven people are missing and 14 have been injured following a landslide Thursday that cascaded down the terraced slopes of a rice field on the Indonesian island of Java, officials said.

The missing people, farmers tending their crops in Brebes district, Central Java, were buried under an avalanche of mud and rock around 8 a.m. (0100 GMT).

The incident followed several days of heavy rain in the mountainous area, which is about seven hours east of the capital Jakarta.

Another 14 farmers were injured and have been taken to a nearby medical center for treatment.

Rescuers including the army, police and local volunteers are digging through the debris to search for survivors, the disaster mitigation agency said.

Residents have been forbidden from entering the area due to fears of further landslides.

"The soil is unstable, if it's raining, it could be dangerous," Apriyanto Sudarmoko, local sub-district head, told national TV station.

"We also ask residents living near the site to vacate their homes until it's safe."

Landslides are common in Indonesia, especially during the wet season between October and April, when rain lashes the country.

Eight miners were killed on the slopes of Mount Merapi, an active volcano near the city of Jogjakarta, in December last year.

A month earlier at least 11 people died in heavy flooding and landslides in Pacitan, East Java.