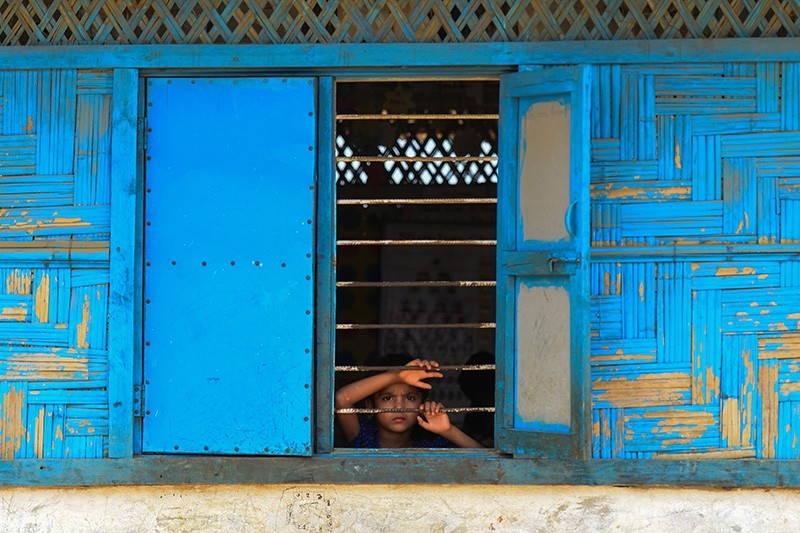 A Rohingya refugee looks out from a school window at Kutupalong refugee camp in Bangladesh's Ukhia district on April 5, 2018. (AFP Photo)
by Compiled from Wire Services Apr 08, 2018 12:00 am

Myanmar is not ready for the repatriation of Rohingya refugees, said the most senior United Nations official to visit the country this year, after Myanmar was accused of instigating ethnic cleansing and driving nearly 700,000 Muslims to Bangladesh.

"From what I've seen and heard from people – no access to health services, concerns about protection, continued displacements – conditions are not conducive to return," Ursula Mueller, U.N.'s Assistant Secretary-General for Humanitarian Affairs, said after a six-day visit to Myanmar.

A Myanmar government spokesman did not immediately respond to requests for comment on Mueller's remarks.

The Myanmar government has previously pledged to do its best to make sure repatriation under an agreement signed with Bangladesh in November would be "fair, dignified and safe."

Myanmar has so far verified several hundred Rohingya Muslim refugees for possible repatriation. The group would be "the first batch" of refugees and could come back to Myanmar "when it was convenient for them," a Myanmar official said last month.

Mueller was granted rare access in Myanmar, allowed to visit the most affected areas in Rakhine state, and met army-controlled ministers of defense and border affairs, as well as de-facto leader Aung San Suu Kyi and other civilian officials.

Mueller also raised the issue with Myanmar officials of limited humanitarian aid access to the vulnerable people in the country and added, referring to the authorities, that she would "push them on granting access" for aid agencies.

"Humanitarian access in Myanmar has significantly worsened in the past year, not only in Rakhine but also in Kachin and Shan states," said Mueller in a statement.

"When you cut that humanitarian lifeline, there is a very real human impact," she said.

The exodus of Rohingya Muslims followed an Aug. 25 crackdown by the military in the northwestern Rakhine state.

The U.N. has documented mass gang rapes, killings – including of infants and young children – brutal beatings and disappearances committed by security personnel, constituting what the U.N. says amounts to crimes against humanity.

"I asked [Myanmar officials] to end the violence … and that the return of the refugees from [Bangladeshi refugee camps in] Cox's Bazar is to be on a voluntary, dignified way, when solutions are durable," Mueller told Reuters in an interview in Myanmar's largest city Yangon.

Myanmar and Bangladesh agreed in January to complete a voluntary repatriation of the refugees in two years. Myanmar set up two reception centres and what it says is a temporary camp near the border in Rakhine to receive the first arrivals. "We are right now at the border ready to receive, if the Bangladeshis bring them to our side," Kyaw Tin, Myanmar minister of international cooperation, told reporters in January.

Many in the Buddhist-majority Myanmar regard the Rohingya as illegal immigrants from Bangladesh. The U.N. has described Myanmar's counteroffensive as ethnic cleansing, which Myanmar denies.

Asked whether she believed in government assurances the Rohingya would be allowed to return to their homes after a temporary stay in camps, Mueller said: "I'm really concerned about the situation."

Part of the problem is that, according to New York-based Human Rights Watch, Myanmar has bulldozed at least 55 villages that were emptied during the violence.

"I witnessed areas where villages were burned down and bulldozed...I've not seen or heard that there are any preparations for people to go to their places of origin," Mueller said.

Myanmar officials have said the villages were bulldozed to make way for refugee resettlement. However, eyewitnesses have reported that bulldozed village are being militarized by the government.