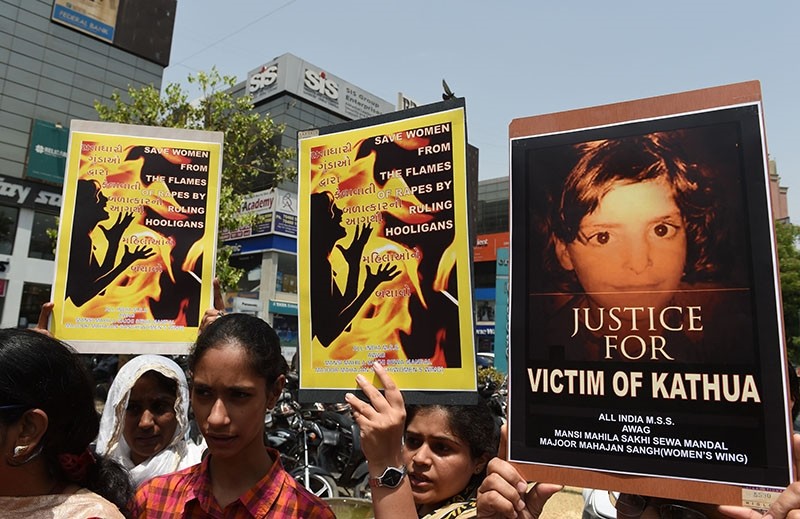 Indian activists and students protest over the rape of a child near Jammu and a rape case in Uttar Pradesh state, in Ahmedabad on April 13, 2018. (AFP Photo)
by Compiled from Wire Services Apr 13, 2018 12:00 am

Mounting outrage over two rapes, one in the disputed region of Kashmir and another allegedly involving a lawmaker from Prime Minister Narendra Modi's party, gripped India on Friday, with government ministers struggling to dampen political fires.

Opposition leader Rahul Gandhi held a candlelit vigil at India Gate in New Delhi, the same site where thousands of people demonstrated in 2012 against a brutal gang-rape in the capital.

"Like millions of Indians, my heart hurts tonight," Gandhi wrote on Twitter after addressing an estimated 5,000 people at Thursday's midnight vigil. "India simply cannot continue to treat its women the way it does." 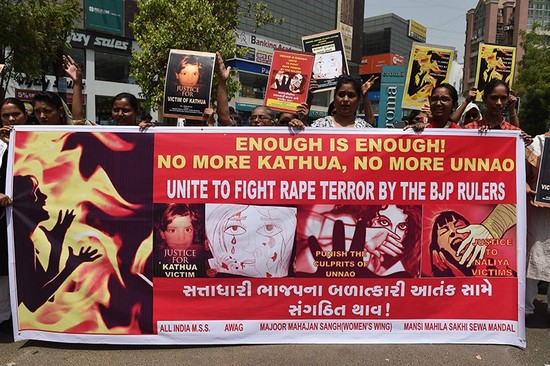 Indian activists and students protest over the rape of a child near Jammu and a rape case in Uttar Pradesh state, in Ahmedabad on April 13, 2018. (AFP Photo)

Modi has yet to speak out on the rapes, which have drawn conflicted responses among the lower ranks of his own Bharatiya Janata Party (BJP). But the Jammu and Kashmir chief minister, whose party is aligned with Modi's, said the murder had "shamed humanity".

Horrifying details of the alleged gang rape and murder of an eight-year-old Muslim girl, Asifa Bano, in a Hindu-dominated area of Jammu and Kashmir state in January, emerged this week from a police charge sheet.

According to the police charge sheet, she was abducted by a school dropout, a minor, and an accomplice who forced her to take sedatives while keeping her captive in a shed and then a Hindu temple for five days.

While in captivity, she was repeatedly raped by the juvenile and different men, including a police constable. She was finally strangled and beaten with a stone, and her body was discovered out in the open in a wooded area.

The victim was from a nomadic Muslim family and all the eight people arrested in the case so far are Hindus.

Jammu and Kashmir is India's only Muslim majority state, but the Jammu region in the south, where the murder took place, is Hindu dominated.

The case has fuelled the sharp communal divide in the region, with Muslim activists condemning what they see as a crime against their community and some Hindu groups arguing that the accused had been unfairly charged.

The BJP shares power in the state, where party members joined a rally to show support for eight Hindu men accused of the crime, including a former bureaucrat and four police officers.

Anger grew after lawyers tried to stop police from filing charges. The crime inflamed religious tensions, polarizing the two communities in the region.

Indians have staged protests, comparing the crime to the fatal gang-rape of a student on a bus in New Delhi in 2012, which led to mass protests and an international outcry.

High profile names from the world of cinema and cricket have also voiced outrage over the crime in a country were nearly 40,000 rape cases are reported every year, according to official figures.

"What is happening to the world we live in???" Bollywood star Anushka Sharma, who is married to Indian cricket captain Virat Kohli, wrote on Twitter.

"These people should be given the most severe punishment there is! Where are we heading as humanity? Shaken to my core," she said.

Cricketer Gautam Gambhir blamed India's "stinking systems" for what some have described as a rape epidemic.

"Come on 'Mr System', show us if you have the balls to punish the perpetrators, I challenge you," he tweeted.

"Yet again we've failed as a society," Bollywood actor Akshay Kumar said in a Twitter message.

Amid fears the case could escalate unrest in a region where security forces are battling separatist militants, separatist leader Mirwaiz Umar Farooq vowed to launch an agitation if any attempt was made to shield culprits or sabotage investigations.

"It is a criminal act and perpetrators of the crime should be punished," he added.

Thousands of Kashmiris joined street protests in Srinagar this week, following the death of four protesters in a clash with security forces. 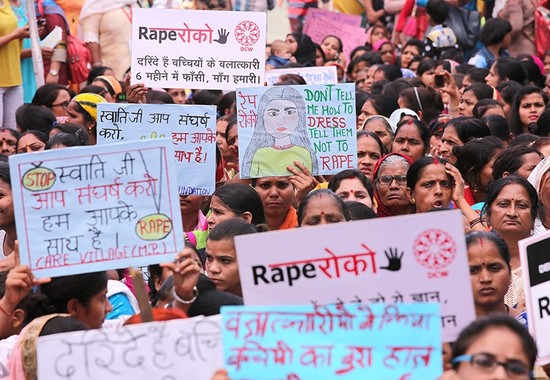 Indian activists hold placards as they support Chairperson of the Delhi Commission for Women, Swati Maliwal (not pictured) who is sitting on an indefinite hunger strike against the alleged rapes of Uttar Pradesh and Jammu and Kashmir, in New Delhi, India, April 13, 2018. (EPA Photo)

In the crime-ridden northern state of Uttar Pradesh, federal police on Friday began questioning a BJP member of the state legislature who is accused of raping a teenage woman in June.

Chief Minister Yogi Adityanath, a rising star in the party, asked the Central Bureau of Investigation (CBI) to take over the case this week after the state's police were heavily criticized for not acting sooner on the victim's complaint.

A CBI spokesman said the lawmaker, Kuldeep Singh Sengar, was being questioned on Friday, but had not been arrested.

Sengar's lawyer has said his client was innocent and the case was a conspiracy to harm his political career.

Ministers have insisted that justice will be done no matter who committed the crime, while defending the government's record on fighting violence against women.

"We are here to safeguard the interest of our daughters, they are the daughters of the nation," federal minister Mahesh Sharma told reporters on Thursday. 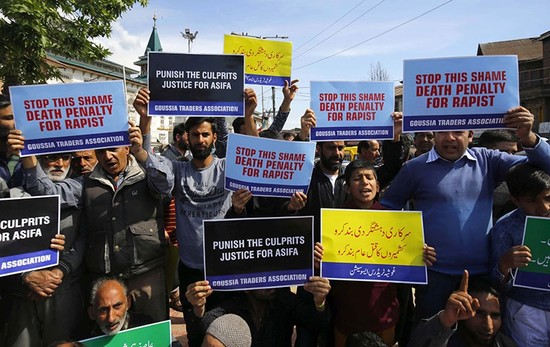 Maneka Gandhi, the minister for women and child development, said her ministry planned to propose the death penalty for the rape of children younger than 12. The maximum punishment now is life imprisonment.

"I have been deeply, deeply disturbed by the rape case in Kathua and all the recent rape cases that have happened on children," Maneka Gandhi said in a video message.

Responding to the outpouring of national shame and anger after the 2012 New Delhi case, the then Congress-led government tightened laws on crimes against women.

India registered about 40,000 rape cases in 2016, up from 25,000 in 2012, the latest data show. Rights activists say thousands more go unreported because of a perceived stigma.