Myanmar army on UN blacklist over sexual violence against Rohingya 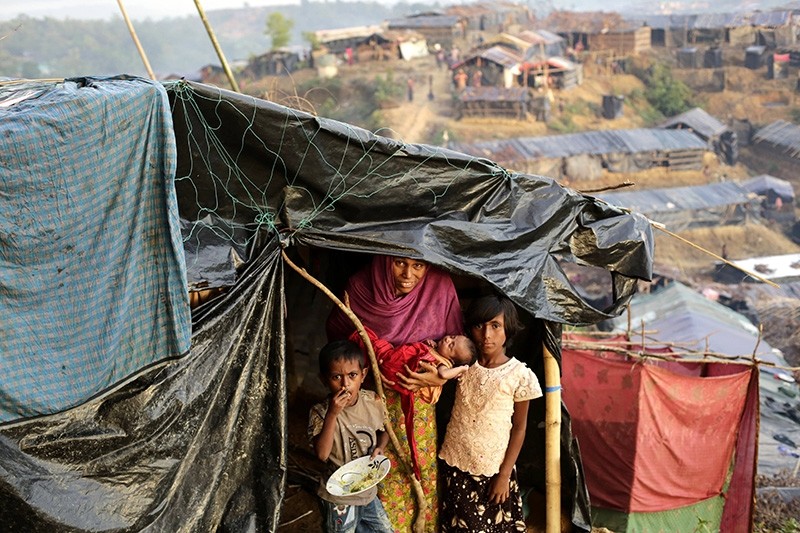 A Rohingya woman poses for a photograph with her children including a new born at her makeshift tent in a camp at Palongkhali, Ukhiya, Coxsbazar, Bangladesh (EPA File Photo)
by Anadolu Agency Apr 17, 2018 12:00 am

The United Nations on Monday added Myanmar's armed forces to its blacklist of groups "credibly suspected" of carrying out sexual violence in areas of armed conflict for the first time.

"The widespread threat and use of sexual violence was integral to [their] strategy, serving to humiliate, terrorize and collectively punish the Rohingya community as a calculated tool to force them to flee their homelands and prevent their return," it said in a report on Myanmar's military, also known as the Tatmadaw.

"The violence is linked with an inflammatory narrative alleging that high fertility rates among the Rohingya community represent an existential threat to the majority population," the report said.

Since Aug. 25, 2017, some 750,000 refugees, mostly children and women, fled Myanmar when Myanmar forces launched a crackdown on the minority Muslim community, according to the U.N.. At least 9,000 Rohingya were killed in Rakhine state from Aug. 25 to Sept. 24, according to Doctors Without Borders.

In a report published on Dec. 12, the global humanitarian organization said the deaths of 71.7 percent or 6,700 Rohingya were caused by violence. They include 730 children below the age of 5.

A delegation from the U.N. Security Council will travel to Bangladesh and Myanmar this month to get a firsthand look at the Rohingya refugee crisis.

All 15 council ambassadors will make the April 26 to May 2 trip.

Razia Sultana, a Rohingya lawyer and advocate, told the council at the U.N.'s New York headquarters that the Myanmar military's use of sexual violence included "hundreds of soldiers and occurred across a vast part of Rakhine State."

"Such scale and breadth provide strong evidence that rape was systematically planned and used as a weapon against my people," she said. "The pattern of mutilation of women's private parts after rape suggests a specific directive to instill terror among Rohingya people but also to destroy their very means of reproduction."

Sultana implored council members to meet with women and girls when they visit the region in order to grasp the severity and breadth of the tragedies being committed.