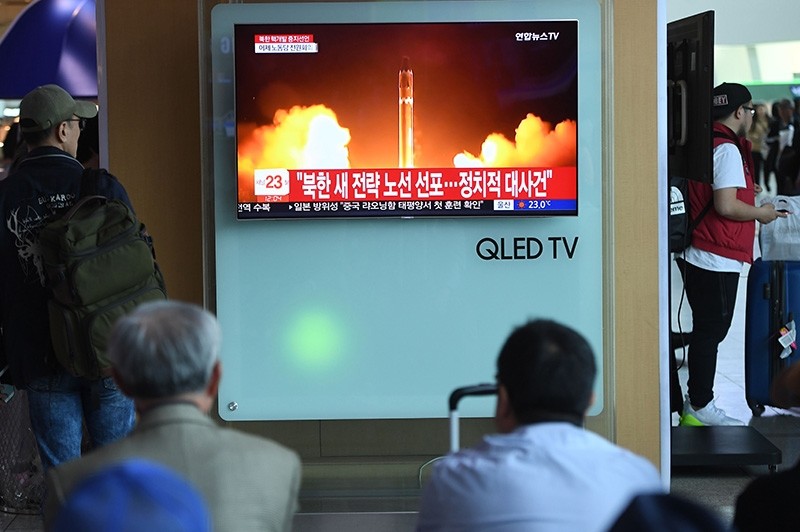 People watch a television news showing a file footage of North Korean missile launch, at a railway station in Seoul on April 21, 2018. (AFP Photo)
by Compiled from Wire Services Apr 21, 2018 12:00 am

China's foreign ministry said on Saturday it welcomed a move by North Korea to halt nuclear and missile tests, which it said would help ease tensions on the Korean peninsula and promote denuclearization.

"China believes the decision to stop nuclear tests and focus on developing the economy and improving people's living standards will help further ease the situation on the Korean peninsula and help to promote the process of denuclearization and attempts to find a political settlement," Chinese foreign ministry spokesman Lu Kang said in a statement.

"China will support North Korea ... (to engage in) dialogue and consultation with the relevant parties."

"It is hoped that all parties concerned will move towards the same direction and take concrete actions to make due efforts to achieve lasting peace and common development in the region," the statement added.

North Korea's state media said earlier on Saturday the country would immediately halt nuclear and missile tests and abolish a nuclear test site in a bid to pursue economic growth and peace on the Korean Peninsula.

The surprise announcement comes less than a week before the North Korean leader Kim Jong Un meets South Korean President Moon Jae-in for a summit in the Demilitarized Zone that divides the peninsula, ahead of an eagerly-awaited encounter with U.S. President Donald Trump.

However, Kim gave no indication Pyongyang might be willing to give up its nuclear weapons, or the missiles with which it can reach the mainland United States.

For years, the impoverished North has pursued a "byungjin" policy of "simultaneous development" of both the military and the economy.

But the leader said that now North Korea was a powerful state, "the whole party and country" should concentrate on "socialist economic construction".