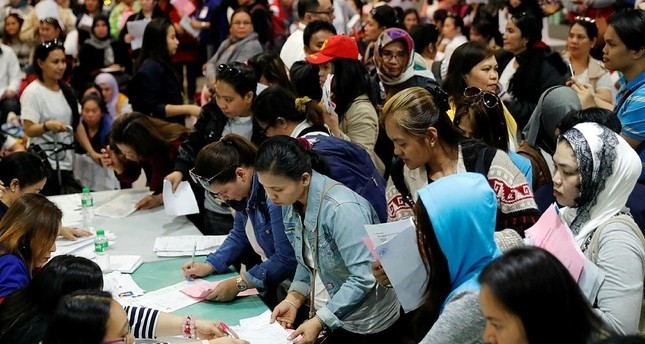 Filipino household workers who were repatriated from Kuwait show their documents as they arrive at Manila's international airport, Philippines, 21 February 2018. (EPA Photo)
by Apr 24, 2018 12:00 am

The Philippines on Tuesday formally apologized to Kuwait for actions the latter viewed as violation of its sovereignty after the southeast Asian nation's embassy "rescued" several overseas workers from employers' homes, the foreign secretary said.

Kuwait had protested over the "rescue" of Philippine citizens working as domestic help, summoned the Philippine ambassador to demand an explanation and arrested two embassy staff who were involved in Saturday's incidents.

"We're sending a note now to my counterpart, and we are apologizing for certain incidents that Kuwait view as violation of their sovereignty," Cayetano told an impromptu news conference.

He said measures had been agreed with Kuwaiti authorities to avoid a repeat of such incidents, footage of which was posted on social media.

The two countries are working on a pact to protect overseas workers after the Philippines in January banned the dispatch of contract labor to Kuwait over reports of abuse by employers that had driven many to suicide.

The ban was ordered after a Filipino migrant worker was found dead in a freezer, the latest incident in what Manila called a pattern of abuse in the Gulf state.

Workers in many Gulf states are employed under a sponsorship system that gives employers the right to keep their passports and exercise full control over their stay.

Rights groups say the "kafala" system, as it is known, leaves millions of workers in the region open to exploitation.

Cayetano said the embassy was forced to "assist" Filipino workers who sought help to leave employers because some situations were a matter of life and death that precluded waiting for local authorities to act.

"We respect Kuwaiti sovereignty and laws, but the welfare of Filipino workers is also very important," he said, adding that domestic helpers account for more than 65 percent of the more than 260,000 Filipinos in Kuwait.

There are 600 workers in embassy-run halfway houses in Kuwait, Cayetano added, with about 120 more who have sough to be "rescued" from employers due to worries over tough working conditions, pay and abuse.