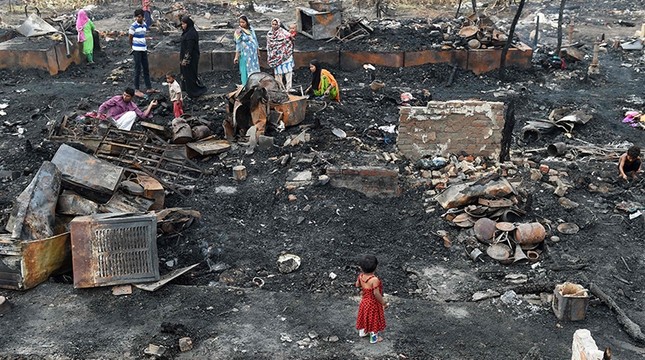 Rohingya refugees look for their belongings in New Delhi on April 16, 2018, following a fire that broke out at their camp early April 15 that left around 200 people homeless. (AFP Photo)
Related Articles

On April 15, a settlement in Madanpur Khadar area was gutted, leaving more than 200 Rohingya homeless.

The incident, in which no casualties were reported, stirred controversy after an alleged BJP activist took to Twitter to claim that he had burnt the settlement.

In two tweets reportedly posted by Manish Chandela using the handle @Chandela_BJYM, he admitted to burning the refugee camp.

"Yes we burnt the houses of Rohingya terrorists."

"WELL DONE BY OUR HEROES," said the tweets which have since been deleted.

The user also appears to have deactivated his account following the uproar by rights activists.

Senior lawyer Prashant Bhushan filed a criminal complaint with the police against the Twitter account user accusing him of inciting communal hate and disturbing peace.

Speaking to Anadolu Agency (AA), Bhushan said: "Action should immediately be taken against the BJP youth wing leader. The police are still investigating the case. It shows that he has support of the ruling party."

Other rights activists have also condemned what they call delaying tactics by the police.

Shahnawaz Alam, representative of Rihai Manch, a civil society group, said: "These people knew that they would get away with everything as the ruling party is with them. They speak against Muslims and incite communal hatred."

Rolly Shivhare, another activist said: "It's very unfortunate that Manish Chandela has not been arrested by now. The Delhi police are still investigating the case and have not reached to any conclusion."

When contacted by AA, the BJP spokesman in New Delhi declined to comment on the issue until the probe into the incident ends.

Meanwhile, victims of the fire say they lost all of their belongings.

"We have to start our life once again. I don't know how many times we will have to face these conditions," said Mohamad Ashaq, a Rohingya victim.

The fate of some 40,000 Rohingya hangs in the balance as the Supreme Court hears petitions against a government decision to deport them.

Since Aug. 25, 2017, some 750,000 refugees, mostly children and women, fled Myanmar when Myanmar forces launched a crackdown on the minority Muslim community, according to the U.N.. At least 9,000 Rohingya were killed in Rakhine state from Aug. 25 to Sept. 24, according to Doctors Without Borders.

In a report published Dec. 12, the global humanitarian organization said the deaths of 71.7 percent or 6,700 Rohingya were caused by violence. They include 730 children under the age of 5.